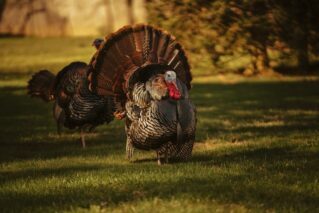 Here are some little known facts about your turkey dinner this weekend.

To begin with, it’s a girl.

More than likely, the bird on your table is female. Male turkeys – toms – being bigger, are usually destined for cold cuts, parts, or ground meat. The smaller female birds – hens –  are reserved for festive occasions. Makes sense. After all, you can only hoist so much poultry out of the oven without a winch.

To begin with, it’s a girl.

That hen will be about 15 weeks old and she’ll have come from one of about 520 turkey farms in Canada and will have passed through one of 17 federally inspected processing plants.   Farmers get their baby turkeys – poults – from hatcheries. There are only seven Canadian hatcheries and farmers specify if they want toms or hens.

For turkey farmers, this is the busiest time of the year. Forty-five percent of all the turkey sold annually in Canada was sold this past week. Christmas is the next big drumstick holiday with farmers doing about 35 percent of their annual business in the weeks leading up to that feast. We Canadians love turkey and, per capita, eat about 3.5 kg of it every year.

Turkeys have been getting larger over the last hundred years. Your grandparents’ Thanksgiving  bird weighed in at around 12 pounds. Sadly, day-after turkey sandwiches were probably a rarity. Today, toms can easily tip the scale at over 40 pounds. The science behind these mega-turkeys inspires plenty of discussion but one thing is for sure – it’s not a result of steroids or hormones. Canada has prohibited the use of these performance enhancing additives for about 30 years now.

But enough about the bird.

You saw those stats; the turkey is a given. Yes, there are the fringe few who prefer a spiral cut, honey mustard glazed ham, but really, it’s turkey’s day, because without turkey, there’s no stuffing. ‘Nuff said.

Let’s talk about side dishes.

In order for it to be an actual Thanksgiving, to meet the criteria for the occasion, certain things are mandatory. Mashed potatoes. But. Of. Course. Just don’t get too fancy. Roasted garlic? Okay, but that’s about it. Gravy – buckets of it. Did you even have to ask? Cranberry sauce is essential. Go crazy with orange rind, crushed hazelnuts and brandy, if you must – just make sure cranberry sauce is on the table in some shape or form.

Brussels sprouts are cultivated for just this day. Here’s where you can flex some kitchen muscle. In recent years, I’ve been running mine through a mandoline resulting in a pile of gossamer greens that get sautéed and garnished with toasted walnuts. Delicious … and I don’t even like brussels sprouts! There should be yams. I never understood what Fluff was used for until I lived in the States. Down south, roasted yams are festooned with dollops of this spoonable marshmallow product thereby fueling the obesity epidemic in one quick ‘n easy dish. This is a side dish that tilts way over into desert territory, quickly becoming a guilty pleasure and a gym membership. Despite being invented by a French Canadian, Fluff is a New England confection that never really caught on north of the 49th. Up here, we reach for maple syrup on our yams.

… it wasn’t until 1957 that Parliament dedicated the second Monday in November  as Thanksgiving.

The crystallization of Thanksgiving can be traced back to George Washington, who in 1789, proclaimed the last Thursday of November should be a ‘day of public thanksgiving and prayer’. It took until 1870 for Congress to pass legislation making it a national holiday. The practice slowly seeped into Canadian consciousness but it wasn’t until 1957 that Parliament dedicated the second Monday in November as Thanksgiving.

So, there’s some holiday trivia for you. Hopefully it’s enough to steer the conversation away from climate change and what’s up with Hockey Canada.

DO YOU GET CREATIVE WITH THIS HOLIDAY MEAL OR CLEAVE TO TIME-TESTED STANDARDS?

What’s your experience with roadside assistance?

Moving from Saskatchewan to Alberta in winter we took the back gravel roads in a borrowed one ton truck.

In the middle of the middle of nowhere – a puncture. Where was the spare? Behind all the stuff we had compressed into the truck! We started to unload in -20C weather. The one vehicle a day coming the other way stopped.  It was a one ton truck with identical size tires to us. He gave us his spare! He told us to stop at the next town, unload inside the garage and leave our spare there and he would pick it up tomorrow.

That was 38 years ago. We are still grateful.  Acts of kindness like this convinced us to stay in Canada and make a home for us and our future family.

My husband and I were crossing Australia’s Nullarbor Plain – 1,100 km of flat, treeless, arid desert – in an old VW van. We travelled at night as temperatures were 45 C in the day.  It was just past dawn when a retread tire blew out and we discovered our lack of a tire iron. We set up our camp chairs on the treeless plain and waited for someone – anyone! – to come along. Sure enough, a Holden Ute pulled up and two friendly Aussies emerged to lend a hand. When their tire iron bent and couldn’t release the bolts, they followed us 150 km to the next town.  The slow journey took hours and their only request was a 6-pack to fill their cooler. We were able to ‘pay it forward’ later in the trip when we came across a stranded family in another VW van. We called a tow-truck and gave them a ride to the next town so the dad could hitchhike to his new job in Perth.

Back in the early seventies, my girlfriend and I climbed into my VW Van on a Saturday morning and started out on a trip to Trail, about 400 miles away. We got as far as Hope. As we pulled into a service station for gas, I noticed the transmission was disabled – totally frozen in fourth gear.  I was told that since this was a long weekend there would be no mechanic until Tuesday. We didn’t fancy waiting for the evening Greyhound Bus, so I turned around and drove 100 or so miles back to Vancouver – in fourth gear all the way. The clutch got burned out but we made it. It cost me a new clutch and a rebuilt transmission, and, of course, no trip to Trail.

In May, we had a tire failure on the Upper Levels highway. Incident happened at 1:15pm. Of course, a lot of new cars don’t carry spares. I’ve been a member of BCAA for 30+ years. I called BCAA and was told it would be a two hour wait.  The tow truck finally arrived at 7:30pm. I thought this was a little excessive, especially in a major metropolitan area. Can you imagine how long it might have taken on any of our interior highways?

How did you get from, “No one behind us, and an oncoming car every half-hour” to nine people, a truck with a winch, a bus full of kindly nuns and the Harlem Globetrotters? Be honest Jane.  You actually got stuck in a pile of snow in a shopping mall parking lot.