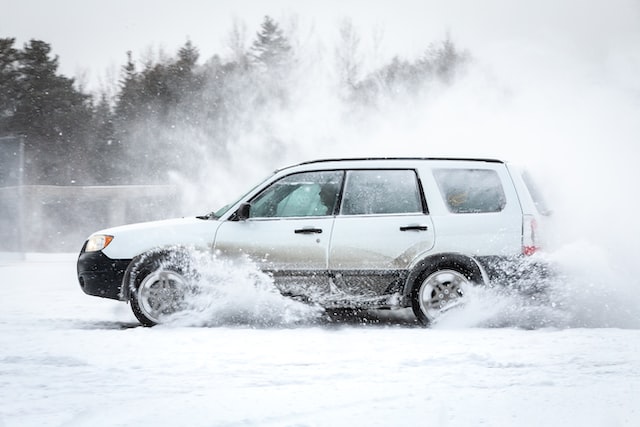 We were beyond the reach of radio stations.

Cell reception?  Forget about it.

The only sound was that of the rental car making good time through this snowy, remote section of the Canadian prairies. There appeared to be no one behind us and an oncoming car only materialized every half hour or so. The road was a luge track. The January snow had all been pushed to the side by a snowplow, creating an uninterrupted, three foot high wall.

Cell reception?  Forget about it!

Both kids had fallen into the customary comas that accompany drives like this.

I was doing my best to not do the same.

Scanning the barren landscape, I whistled low and ominously.

“Boy, if your car broke down out here” –  big pause for effect –  “it could be weeks before anyone found your body.”

I like to make pronouncements that keep the kids on their toes. They had grown accustomed to my various road safety inquiries:

“You guys buckled up?”

“Good. I wanta try something.”

Another seatbelt gambit was pretending the brakes had failed.

My first thought was we’d hit a bird.

I’d just made the remark about the length of time it would take for our decomposing bodies to be discovered when we saw an approaching car.  It was filled with boys and moving quickly.  Just as they passed us, something struck our windshield.  The windshield filled with thick red material. My first thought was that we’d struck a bird. I turned on the windshield wipers thereby smearing the windshield with whatever it was that had hit us. Our speed and the obliteration of vision gave rise to a momentary panic.  Given that we were traveling through a virtual luge course there was little option when pulling over.  You were either on the road or in the snow bank.

I plunged into the snowy wall.

I got out to investigate.

The windscreen was covered with a now frozen ketchup scrim. The yahoos in the other car had thrown ketchup packages at the car.

I dug a credit card out of my purse and started scraping; scraping and cursing.  No cars passed us from either direction.

Mission accomplished, I got back in the car and tried to reverse out of the snow bank.

And then my daughter started crying and asking when our bodies would be found.

… three granola bars but only two juice boxes.
One of us wouldn’t see dawn.

There was no cell reception.

There were three granola bars but only two juice boxes.  One of us wouldn’t see dawn.

I turned on the emergency lights.

A truck loomed into view.  I didn’t have to communicate our circumstances by semaphore – they stopped.  They saw a parked car where there ought not to be a parked car and they stopped to help.  One of them even put out traffic cones.

They had me get back in the car and added their weight for traction.  Then another vehicle stopped.

By now there were about nine people standing on this stretch of road all intent on getting my car out of the snow bank.  Despite this ad hoc army, nothing was working.

What was needed, it was decided, was a winch.

A truck pulled up.

He got out a big metal hook and attached it to the underside of my car.

Moments later we were out of the snow bank.

So, I was wrong.  It wouldn’t have been weeks before they discovered our frozen bodies.

There are good hearted people everywhere.

And if you’re lucky, one of them will have a winch.

WHAT’S YOUR EXPERIENCE WITH ROADSIDE ASSISTANCE?

What are the idiomatic expressions from your heritage?

I have a Scottish heritage so plenty of cultural expressions there. However, I thought that instead I would share the mangling of some of our very own local colloquialisms that a very good friend of mine is prone to. He truly doesn’t know he’s mangling them either. Here are a few examples: “The cows will come home to roost on that one.” “You don’t want to cut the baby in half with the bathwater.” “I know this place like I know the back of my head.” I could go on but those are some of his most common and best. He is very entertaining.

My mum, who passed away last year at the age of 99, was of Scottish heritage and had many expressions. One of my favourites was when asked what the weather was like she might say – well, there’s enough blue in the sky to make a Dutchman a pair of pants.  I believe at one time, Dutch seamen were known for their very wide pant legs. We all miss her funny sayings.

These are some of the common Cantonese idioms that were used frequently by my parents. They bring back fond memories when I hear them:

Riding a cow to look for a horse: make do with something else; use a substitute.

In some Cantonese communities in SE Asia countries (Singapore, Malaysia etc) “to go to Holland” or using “Holland” to describe a suggestion/event, literally means death/hell but in a friendly/joking manner. It actually means stupid, crazy, does not make sense.  If someone had planted yam,  that person had passed away. They were buried like how you would plant a root vegetable. In Cantonese “pineapple chicken” are feathers that stick to your clothing. A person is a pineapple chicken when they rely on others to live. Most commonly used on people that pretend to have forgotten their wallets and have others pay for their meals; sponging off others.

My English grandmother would say, when describing a person she considered to be honest and ethical: S/he is “all wool and a yard wide”.   In her culture, that meant you got full value for what was advertised.

I’ve never heard anyone else use that expression, from that day to this.

Where I was born, in Argentina, the expression for a good person was “un pan de Dios “

My father’s two favourites were:  “don’t take any wooden nickels” and “watch  your Ps and Qs.”  The first I took to mean several things.  Watch yourself out there.  Be careful, the world can be a dangerous place.  The latter, I learned later meant watch your pints and quarts, but in his case I think it  meant behave yourself.

My husband is from Australia and he says he’s as ‘happy as Larry’  which I think is silly.  I say I’m as happy as a clam which he thinks is just as silly.