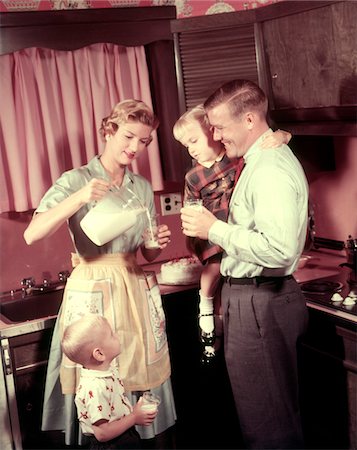 Wife and mother: a huge, but sometimes, narrow job title.

It wasn’t so much a ‘down tools’ moment as it was a slow realization that she didn’t like the direction things were going. What brought it to a head was the weather. It had rained and she had apologized for the rain. Plans had to be canceled and there was disappointment.

I’m sorry about the rain, she said.

Her husband and her three kids all accepted her apology. That’s because in some esoteric way, she was responsible for everything, even the weather. Wife and mother: a huge, but sometimes, narrow job title.

Her name is Margaret. She wasn’t just a good wife and a good mother, she was a happy wife and mother.

She’d married a great guy but she’d been young, just 21.

Back then, if you wanted to go out, you needed to be paired up. There was little social life on offer for the unaccompanied. Margaret and, let’s call him Ed, found themselves coupled up in order to be allowed admittance. It didn’t take long for Margaret to see Ed’s many fine qualities.

It was simply assumed she’d marry and raise a family.

Margaret was pretty and she was clever but she had no great ambition in life. She hadn’t gone on past high school, but then, few women did. It was simply assumed she’d marry and raise a family. That was the standard objective. A life that wasn’t a replica of the life her parents had provided was beyond Margaret’s comprehension. She would become her mother.

When Ed and Margaret married, she elected to remove the word ‘obey’ from her vows. Ed didn’t object but the omission registered with their friends and family. By Margaret’s 22nd birthday, she was a mother. In short order, two more kids arrived.

Ed proved to be an ideal husband and father. Margaret had no complaints.

But she had inklings of complaints.

Her world, she sensed, was becoming repetitive and growing smaller. There has to be more to life than just this, she found herself thinking. She chafed under the narrowness of her role.

The 60s came along and women everywhere were starting to read Betty Friedan and Gloria Steinem. Their message resonated with Margaret. Her husband went on business trips.  He went on sailing trips. He had his work. Margaret had the kids and the kitchen but she had little idea of who she really was; of whom she might have been.

One day she announced to her husband that she was going to go on a trip.

‘An excellent idea’, was his rejoinder.

‘Where are we going?’

‘Oh no’, said Margaret. ‘We aren’t going anywhere. This is my trip.’

And because she couldn’t think of anywhere to go, Margaret said the first place that came to mind.

And so Margaret went.

She had never been anywhere all by herself.

She booked flights and she hailed cabs.

She checked into a hotel and saw the sights.

She ate dinner alone in the hotel restaurant.

She was thoroughly miserable.

At one hotel, the desk clerk asked her, Miss or Missus?

At one hotel, the desk clerk asked her, Miss or Missus? Margaret bristled and asked why the clerk hadn’t asked the man checking in just before her what his marital status was. The clerk raised his eyebrows and wrote down ‘Mrs.’

Margaret figured that the clerk reasoned that only a married woman would be that testy.

In the course of those ten days Margaret realized that what she’d been looking for was her voice.  She’d happily assumed the mantle of wife and mother but she’d lost Margaret in the process.

Margaret returned home from her trip with a different perspective. It might be viewed as a small thing, but, to her, that solo trip was epic. She recognized that she was the linchpin in every equation – that she could be held accountable for just about everything, including the weather – but that she could redefine her role as wife and mother. When she returned home, she discovered that her family had learned how to iron, how to cook, how to take responsibility for themselves.

It was a start.

That trip, she says, was a turning point in her life.

Margaret is now 90. That trip, she says, was a turning point in her life. It was, she says, the moment she found her voice.

This is a small story but it’s interesting to consider it on Mother’s Day. Today, women have a great deal of latitude. Within these new latitudes, however, expectations have been hugely expanded. The job of motherhood is now tougher than it’s ever been.

Hats off to all the mothers out there.

Register for my newsletter to be entered into the draw for James McCormack’s Book!

By the way, when you sign up, you’ll also receive an invite to my Timex Watch contest!!

WAS/IS MOTHERHOOD EVERYTHING YOU EXPECTED? DID YOU HAVE TO TAILOR YOUR PARENTING STYLE TO SUIT THE EXPECTATIONS OF OTHERS? IS IT HARDER TO BE A MOM TODAY THAN IT USED TO BE?

What do you eat and not eat, and why? Do you think your diet is helping or harming you?

We have been  vegetarians for more than a decade and we believe our health has benefited from this discipline.   It started off an ethical choice but we now are convinced that we live and look better having made this choice.  It’s not easy to get it right but it’s worth the effort.

You have to wonder about all those kelp and kale loving people out there who happily drink to excess and smoke pot – it’s still smoke!  I’ve eaten a wide ranging diet of decent food that includes plenty of fat and sugar and I’m as healthy as a horse at 80 years of age.

The only people who need a gluten-free diet are celiac people.  People who jump on these food bandwagons are fanatics who only want attention. Bake a good loaf of bread and eat it while it’s warm – there’s nothing better!

I enjoy food. I love to cook and bake!   I grow vegetables and I shop at farmers markets.  I try to be informed about nutrition but not to obsess about food.  I think Jame McCormack’s advice about keeping your  vitamins at a friend’s house is a good idea as that walk to get them is probably good advice.  Get your vitamins from food and go out for frequent walks!  All good advice that I try to follow.