THE ALCHEMY OF COMPOST 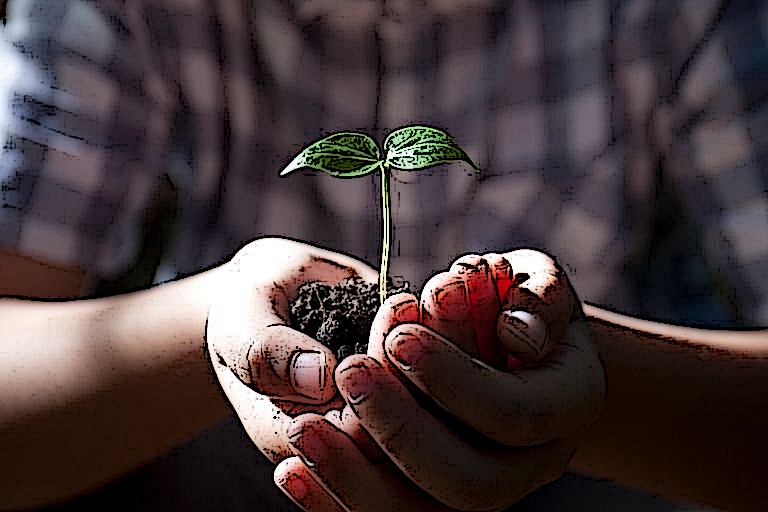 A little bit of alchemy and thrift.

And it’s one of the most responsible things you can do.

A perfect example of how things ought to work.

Older homes seemed to always have a compost pit for lawn clippings and leaf debris. When I was a kid, poking those pits to reveal skeins of baby worms was fascinating. Turning the compost pile was just one of those things adults did, like putting up Christmas lights or cleaning gutters. In my childish estimation, composting was a necessary part of adulthood, perhaps not as thrilling as burning stuff in an incinerator can, but entertaining in its own right.

Today, composting, which can be messy and a long-process, is at odds with modern life. The earth may need this renewable resource now more than ever but tell that to someone fourteen floors from the complex’s composting bin. There are various programs you can subscribe to – in Canada, Toronto was the first to implement a green bin program in 2002 – but it takes a certain commitment. A lot of people call themselves environmentalists but their potato peels say otherwise … and that’s despite the best of intentions.

Retired microbiologist, Dr. Peter Stovell, The ‘Compost King of Kerrisdale’, lived down the block from me. His front yard was eaten up with gigantic compost piles of food scraps collected from UBC Food Services, each pile swathed in black plastic. He could be seen routinely plunging augers and pitchforks into the rotting pyramids. Dr. Stovell was discovered one midnight hosing down the piles, alarmed by the elevated temperatures the decomposing material had generated. We imagined him hollering, “Run! She’s gonna blow!” as his decomposing banana peels and apple cores created their own China Syndrome.

It’s like trying to get a reluctant Saint Bernard into a car.

I bought myself a fancy composter that, in order to speed up the decomposition process, spins in its own cradle. A dark and distinguished apparatus, it’s tucked into one discreet corner of the garden. I’ve given it several years of sincere effort, but I simply cannot get it to spin once it’s even one third full. It’s like trying to get a reluctant Saint Bernard into a car.

To that end, I had defaulted to the City of Vancouver green bin composting program.  Being a girl with tartan blood, this wasn’t entirely satisfactory.  All that nutrient-rich material being outsourced when my own garden could have benefited?  Alas!

Years ago, I did a TV series on environmental tips. One of the tips was to run food scraps through a blender to make a liquid fertilizer. I take that back; do not do that. I learned the hard way that if you pour liquified caesar salad around your geraniums, rats will dig up those geraniums looking for the croutons they suspect were part of the deal.

… kitchen waste into topsoil within 20 hours.

So, how to reconcile my Scottish self with my composting genes?  I’d heard about Pela, a BC company that was revolutionizing composting. I contacted them and they sent one of their devices to test. It’s called the Lomi and it is to composting what the washing machine was to the washboard. What my not-so tumbling composter takes a year to do, the Lomi claims to do overnight: kitchen waste into topsoil within 20 hours.  As a woman who has forsaken miracle skin creams for lard, I was skeptical.

It’s a handsome apparatus and looks like what a bread machine would look like were it designed by Steve Jobs.

If you’re like me, you can fill up one of those stainless steel compost buckets in just one family meal prep. If the Lomi did what it said it could do, it might be the end to the endless discussion of who was going to dump the compost bucket. I set the Lomi up on my kitchen counter and loaded it with the detritus of meal preparations. It’s a handsome apparatus and looks like what a bread machine would look like were it designed by Steve Jobs. I set the program for warp speed composting – the Lomi setting as opposed to the two lesser settings – and waited to be astonished.

The next morning I lifted the lid off the Lomi and discovered that my bucket full of food scraps had been – presto, change-o! – transformed.  Where there had been potato peels, orange rinds, egg shells and something mysterious from the nether reaches of the fridge, there was now a fine, dry soil. The mass of the kitchen scraps had been reduced to a cup and half of odorless, nutrient-rich topsoil. I was astonished.

Topsoil within 20 hours is a magical transformation worth waking up to but the big news is – hallelujah! – the trek to the bin in the alley is officially over and all that good stuff is now destined for my garden.

HOW GREEN ARE YOU? WHAT’S YOUR ECO-WARRIOR BADGE OF HONOUR? DO YOU COMPOST?

Here for the Lomi Contest?

Gone are oozing buckets of slime.  Now, within less than a day, your bucket of food waste (and other stuff) is transformed into topsoil via the Lomi tabletop composter.

Courtesy of Pela, you can enter to win your very own Lomi, valued $500.

Sign up for the Newsletter for more details. Good-luck!

Make sure you add thebooklessclub@gmail.com to your email address book.

Was/is motherhood everything you expected? Did you have to tailor your parenting style to suit the expectations of others? IS it harder to be a mom today than it used to be?

I often think of my grandmother and the roles she managed so well.  She didn’t have the options that I did but I think she could have been a CEO if she’d wanted. She had all of the qualities required to excel in that roles but, instead, she excelled in running a home, raising her children and contributing to her community.  I run all day and feel like I’m never in the right place.  Everything but my work gets short changed but only because I could lose that job if I didn’t exceed expectations. I often wonder if being spread this thin was the goal we women were after.

Today, parents who have pre-school children (0-4 years), usually have their children in full time daycare. That is, they drop them off at 07:00,  pick them up at 5:00 or 5:30, leaving two hours to get them dinner, bathed and to bed by 7:30. Compare this to parents (usually it was mothers) who did/do the childcare work without even a coffee break, or any kudos, benefits, holiday pay, job security, etc. Whose job was/is harder?  Hats off and respect to any parent who did/does this most difficult job! They deserve much more recognition!

If truth be told, I couldn’t do half of the stuff my wife does.  She’s managed a wider portfolio of concerns and responsibilities than I ever did.  I watch my daughters juggling all of their adult responsibilities but I don’t comment. Their generation seems to think that kids will raise themselves and society will be just fine with the result.  I wonder ….

My husband and I were pushed into an unexpected situation in 1963 when our first child was born. She needed major surgery at two days old. She left for VGH while we waited with surreal anticipation. She had flaming red hair (also unexpected) which had to be shaved before the operation. Thankfully the operation was successful and we were able to bring her home on Mother’s Day. I stayed on the mother track for twenty years and thankfully was able to stay home with our three children. Now, many mothers must work; juggling finding and keeping daycare as well as all of the other responsibilities of motherhood. I feel for their load and admire how many seem to keep themselves and their families balanced and stable.

Motherhood is the hardest, most thankless, self sacrificing, draining, and wonderful job in the world.  I would not trade it for the position of the CEO of the world’s richest company … hands down.  In the end, shaping those young lives on a day-to-day basis, as mundane as many would consider that, brings the richest rewards.