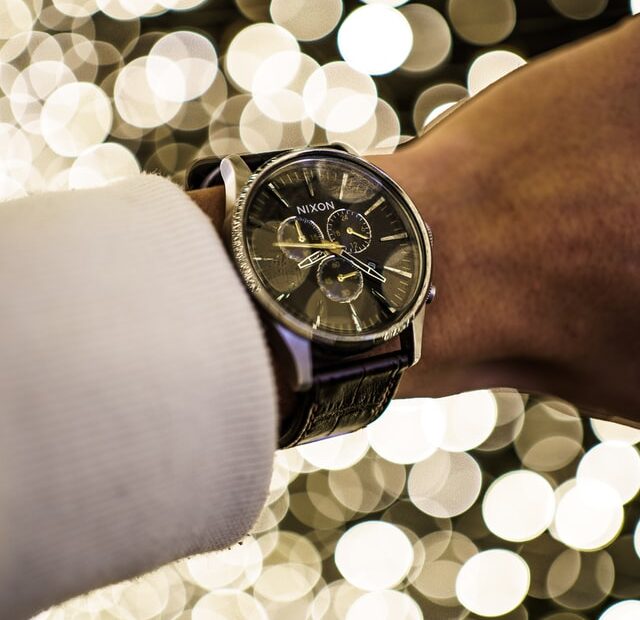 That’s the person to rely upon.
The wrist watch wearer.

If you had to look for some sign that someone was conscientious, some indicator that they were dependable, what would you look for? Well maintained shoes, you say? Good choice, good choice. Clean fingernails, perhaps? Yes, perhaps. Maybe it’s in the eyes?  A certain steadiness of gaze? Well, according to the University of Glasgow, College of Science and Engineering, you’ll want to look at the person’s wrist. If they’re wearing a wrist watch, that’s your candidate. That’s the person to rely upon. The wrist watch wearer.

In August of 2015, two lads – students at the University, and, I’d wager, watch wearers themselves – conducted an academic inquiry into the aspects of an individual’s appearance that predict personality and related behaviour. In their abstract, they sought to consider ‘the common fashion accessory, the wrist watch’. A regular watch wearer was defined as someone who ‘wore a standard wrist watch, most of the time, for at least a year’. They identified what they called the ‘big-five personality traits’ and sought to tease out correlations. Their study revealed that people who wore a wrist watch demonstrated ‘significantly higher levels of conscientiousness’ than those who did not.  Hands-free beer hat wearers scored poorly in all categories. Not conscientious at all. The study didn’t reveal that but that’s been my scientific observation and you’re welcome to it.

But this is no surprise. You remember when you got your first watch, don’t you?  Implicit in the gift was the expectation of punctuality.  A watch said, ‘You’re an adult now; don’t be late.’  But as much as they were a piece of equipment with a job to do, they were also fashionable additions to a wardrobe. Gianni Agnelli, a major Italian industrialist as head of the Fiat company, was a celebrated fashion icon. The hallmark of his personal style was the wearing of his wrist watch over the sleeve of his shirt. Molto alla moda! Hollywood is full of crazed watch collectors. There’s even an instagram account, @celebwatchspotter, with 346 thousand followers keeping track of who’s flashing what at wrist level.

Time was an approximation.

The evolution of watches is an interesting one. Long before the expression, ‘Nine o’clock, on the dot’, people relied upon public clocks. Time was an approximation. Personal time pieces were usually imported pocket watches; dependably expensive but not dependably accurate. The advent of the railroad, however, made punctuality critical. Yankee ingenuity turned its attention to the task of personal time keepers and, remarkably, created a pocket watch that retailed for exactly one dollar back in 1892. It went by the name of the Yankee Dollar watch. Annual demand was so great that, at the dawn of the 20th century, the manufacturers were selling 12,000 of these watches ‘that made the dollar famous’.  The “War to End All Wars’ necessitated an innovation to the democratized pocket watch and thus the wristwatch was born. Driving all of this were two brothers from off of a Michigan farm, Robert and Howard Ingersoll. You probably know the company that they created. In fact, there’s a good chance that at some point in your life, you’ve been a customer of the Ingersolls. The company they founded is called Timex.

“It takes a licking and keeps on ticking”.

It’s a safe bet that your first watch was a Timex, probably an Easy Reader. Timex started making them back in 1977. Clearly, there are a lot of conscientious people out there: they sold well over 100 million of them. In fact, one out of every three watches sold in America was a Timex. The most memorable Timex, however,  was the Marlin. The durability of the Marlin was demonstrated via captivating ads that showed the watch strapped to a motorboat propeller, embedded into the head of an arrow, placed under an elephant’s foot, taped on the bellies of sumo wrestlers and other clever trials.  At the end of every test, the watch would be held up to the screen and the announcer would pronounce those famous words: “It takes a licking and keeps on ticking”.

The new and improved me is starting to wear a watch again. I like the look of it and a nudge in the direction of conscientiousness wouldn’t be a bad thing. I contacted Timex when I was researching this story and they’ve kindly sent along several watches for me to give out to my readers.  If you’d like to win one – there’s even a kid’s watch – check out my website*, in … say … exactly … six minutes.

Set your watches, everyone.

WHAT’S ON YOUR WRIST? MAYBE YOU’RE A WATCH COLLECTOR? HAVE YOU EVER RECEIVED A WATCH AS A SPECIAL GIFT?

Here for the Timex Contest?

They started by coming up with a better way to make clocks. They went on to innovate a cheap, but reliable pocket watch. In 1933, they made the first Mickey Mouse watch. Illuminated watch faces, the quartz revolution, digitized watches and sports watches: Timex keeps innovating what we expect from a watch. Today, their multi-function smart watches can even detect a fall or track a child’s location.
We’ve got two adult Timex models to choose from and one child’s model, as well.

The contest opens noon PT Saturday, April 23 to 9pm PT Sunday May 8. Make sure you add thebooklessclub@gmail.com to your email address book.

Does it annoy you when someone doesn’t reciprocate your hospitality? Do you feel obligated after you’ve accepted someone’s invitation?

I’m not strictly ‘tit for tat’, but I expect to be treated once in a while.

People have all kinds of excuses not to follow this traditional custom, especially in Covid times. Some of them say,  I can’t cook as good as you, or my place is too small, or my dog doesn’t allow visitors, or offer no excuse at all.  And then there are the ones that remind you all the time that they owe you an invite, but never get around to do it, even if they’re able to take you up on an invitation on short notice. Regardless, I still like to cook for guests and entertain.

I had friends who occasionally invited me over for spectacular meals. I was completely intimidated by their culinary abilities and thus hesitant to invite them back. Another friend felt the same so we pooled our resources and the work to create a simple dinner. The evening was a success, largely because of the conversation and camaraderie.

When I was moving from the city, my guilt for my minimal reciprocation lingered. So I invited them to a very nice restaurant where we had a good meal and good wine. That certainly didn’t restore the balance of reciprocation but it was a very enjoyable evening and I think the gesture was appreciated.

We all agree that it’s a good thing to be grateful so when someone makes you the focus of their hospitality, you should return the kindness.  It’s obviously not as simple as, ‘you do this, now I do that’, but it is about showing appreciation. Nobody likes to be taken for granted, especially by chronically deadbeat guests. If they like being a guest, why wouldn’t you like the same opportunity?

Like you said, Jane, it’s the law of the playground.

Reciprocation Protocols ought to have limits. Case in point: you accept an invitation to someone’s house for dinner. It’s an awful evening. You don’t click with your hosts. Conversation is awkward. They’re terrible cooks. They don’t open the decent wine you brought and pour their own Home Wine Kit plonk instead. But you honour your social contract. You reciprocate. Then they invite you back. You feel obligated to invite them to your place … again. And so on. There has to be a gracious way out of this misery!

The French have a word – largesse – that means ‘I have enough for me and for you’. I was born in Quebec City, though we moved to Alberta when I was ten. No one would guess I translate between two languages but I’ve learned the difference between largesse and reciprocation: treat hosts with the same coinage. It’s a gift or a duty.

We have no need nor expectation of visitors providing us quid pro quo; their friendship and company is sufficient (though we always appreciate a nice bottle of wine).  During our few years of condo living, dinner parties proved a challenge due to reduced space and a totally open kitchen.  Now we live in a lakeside Okanagan home and are thrilled to entertain guests, whether for a quick visit, a meal, a day of watersports or an overnight stay … and many haven’t the option of reciprocating similar hospitality … but no worries.

For almost four decades, my husband and I had two major parties a year plus guests for dinner almost every weekend.  While we loved it when people occasionally sent a dinner invitation in reciprocation, we just liked to entertain.  If one is looking for  a return gift of an invitation, they are entertaining for the wrong reason.   However, there is one rule in this household – if you accept an invitation and don’t show up, you get a black mark against your name.  Three such marks and you are off the list.  I am pleased to say that has rarely happened as people seem to like to get together to visit.

Have a party because you want to and because it gives you and your guests pleasure.  There doesn’t need to be any other reason.

I like to follow the Japanese custom of bringing a token of appreciation for my host. I find a decent bottle or two of wine is usually well received and put to good use.