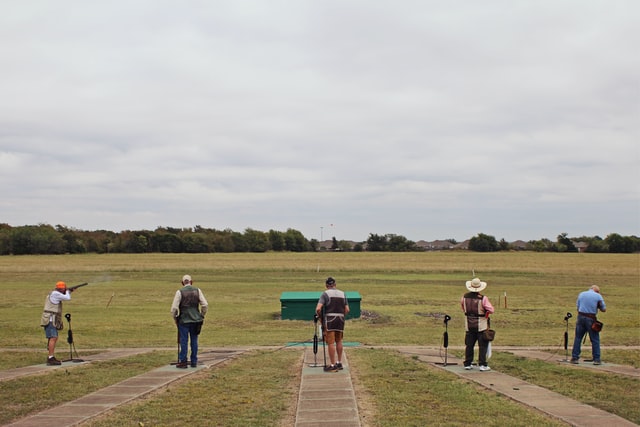 My right arm is pretty much totally out of commission.

I have a giant bruise blossoming on my shoulder. My left arm has its own complaints.

The wages of curiosity ….

Tucked in off of Sidaway Road in Richmond, you’ll find the Vancouver Gun Club.

A more appropriate name would be the Vancouver Shotgun Club, because that’s all that they shoot there: shotguns. No rifles, no handguns. And the only thing that they’re shooting at is targets, flying targets. Not ducks or birds, but fluorescent orange miniature frisbees called clays. The clays are  launched out of oscillating machines called bunkers. If you hit a clay just right, it’ll explode. Very satisfying, that. The sport is called traps which is similar to skeet. The only thing I knew for sure about either of these sports is what you see in movies: people in tweed jackets pointing shotguns into the sky, hollering, “Pull”. That’s the signal to launch the target. Both skeet and traps are marksmanship sports. Hand/eye coordination and, I’ll wager, a certain amount of upper body strength, is key. The task is to shoot down those whirling discs with your shotgun.

How hard could it be?

Well, like everything else in life: way harder than it looks.

But also, more fun, too!

Several times a season, the Vancouver Gun Club offers Guns and Roses, an introductory course designed specifically for women. Even at the Olympics – both skeet and trap shooting are summer Olympic events – they have different parameters for men’s and women’s events.

… you get to utter that celebrated single word: “Pull!”

An instructor will take a group of people in clutches of four or five and move them around the 48 acre course. You start with an introduction to the mechanics of the gun and the bunker.  There’ll be a demonstration of the skill in action and then you’re handed a shotgun. It looks so damned easy!  You settle into your shooting posture.  When you feel confident in your stance – lean into it! – you get to utter that celebrated single word: “Pull!”  A milliseconds later, a blur of orange passes before you. And then another. And another.

The trick, apparently, is to relax the eye and let your eye guide your gun to the target.

A fundamental law of physics is that for every action, there’s a commensurate reaction.

If, like me, you shoot too soon or too late or a mile wide of the moving target, your clay ‘pigeon’ will plummet to earth, intact. You’ll get the chance to repeat this while someone advises you on how to improve your shot. If you’re not holding the shotgun exactly right, this will be the moment your body assembles a palette of burgundy, navy and aubergine to start work on a whopper of a bruise. That’s the consequence of the gun’s recoil, or kick.  A fundamental law of physics is that for every action, there’s a commensurate reaction. When you pull the trigger you launch a shell of pellets – the shot – down a barrel at great force. The recoil is a mathematical function of the weight of the gun, the cartridge, the velocity and, in my case, utter ineptitude. There are a variety of pads to insulate you from the recoil – now you tell me! – but you’re on your own when it comes to supporting the weight of the gun with your left arm. You quickly get used to it, but you feel it the next day.

The course takes a couple of hours and, in short order, everyone’s score improves.

There’s a lovely quiet companionability to watching one another concentrate and shoot.

The world goes away in those tightly focussed moments.

Leveling that shotgun, settling into the task, takes up all of your brain. The world goes away in those tightly focussed moments. And as for uttering “Pull’ while you squint down the barrel of your shotgun – well, that’ll never get old.

If you think you’d like to give it a try, I have a couple of passes to the introductory class to give away. Register for my newsletter to find out more.

Register for The Plain Jane newsletter and then sign up for a chance at an introductory class in shooting traps.

What’s your indoor shoe policy? Shoes on, or shoes off?

Your daughter is exactly like mine. She has a 500 square foot apartment in the West end. We were asked to water her plants while she was away. No shoes in my apartment! So I made 50 running shoe cut out footprints on paper, then my husband and I scattered them all over the floor. A good laugh from her when she returned. I still have them if you want to borrow them. P.S. We didn’t  take off our shoes. She’ll never know until she reads this.

My late step father was a committed ‘shoes on’ person and felt insulted when we asked him to remove his shoes. For years we tolerated his annoying resistance. At one Christmas Day dinner he took his dog out to the backyard for a quick pee. When he sat down at the table there was the distinctive odour of dog poop. Upon realizing that his shoes were the culprit he still  refused to remove them and my sister ended up under the table yanking his shoes off. It was a Christmas to remember for all the wrong reasons.

Now you’ve REALLY hit on a hot topic!  Thanks for the facts Jane.  I’m normally a rational person –  “just the facts ma’am” – but I will never, EVER, ask people to remove their shoes in my home.  I consider my home to be a place to be lived in, comfortably.  That includes wearing your shoes if you wish. Sweeping/vacuuming once in a while takes care of anything tracked in. I do adhere to other people’s wishes in their houses – including my daughter’s.

My shoe policy is nay but I do abuse it occasionally when my kids aren’t around.  We’ve built two houses.  We moved into the first when I was four months pregnant. That house had loads of carpet, some in the family room and lots in the bedrooms. After three children – all boys – I gave up on carpet and was resigned to the constant cleaning caused by boys who would forget to take their shoes off. We built a three storey house when we ran out of bedrooms (needed an extra one for a nanny) and that house was designed without carpet.  I have a penchant for warm floors so we designed the new house with in-floor radiant heat so going barefoot is quite enjoyable in the new place. My recommendations to help keep a house germ free and relatively clean is to ditch the carpet and, if possible, have warm floors.  Your feet will love you for it!

I was born and raised in Seattle and spent my first 25 years there. Never, ever in all that time, did anyone ask visitors to take off their shoes. When I moved to Vancouver, I was surprised to have people offer to take off their shoes when entering my home. I decided it must be some quaint local custom practiced by people who’d grown up on a farm. If you lived on a farm, of course your shoes would always be muddy, and, of course, you’d always take them off at the door. But was anyone even thinking about the germs they were tracking in?

For over 30 years now, we have had a strict “NO Outdoor Shoes” policy in our home! (It is OUR sanctuary you know!)  For our guests, we have a ‘guest slipper’ box next to the front door. The guest would choose a pair for her/himself after removing their outdoor shoes. The box also allows the guest to sit while changing footwear. Also, easily seen when entering our home, is a sign we made to introduce our ‘policy’. The idea is to make the guest feel as respected as possible while following our ‘rule’!

When the company I worked for transferred me from Montreal to Vancouver in 1978, I was ready for a new adventure! It took me a little while to get to know people outside my work environment, so I was very happy when a neighbour invited me to a Christmas gathering at a friend’s house.  I went shopping and found a new dress to wear, befitting for the occasion, and a lovely pair of high heel shoes with matching purse.  Upon my arrival, I noticed a row of shoes  at the entranceway.  Ladies were wearing ballerina slippers and men in socks.  My jaw dropped. My lovely new high heels had to be removed and there I was in my nylon stockings, slip-sliding on the hardwood floors (didn’t get the memo to bring slippers). In Montreal, this rule didn’t exist, however, thinking about it now, we did carry a shoe bag in the winter so we could remove our boots and put on party shoes.  I had never heard of removing your shoes when entering one’s house. After 40+ years I’m still not entirely used to it but do come prepared with a shoe bag and a nice matching pair of indoor shoes.