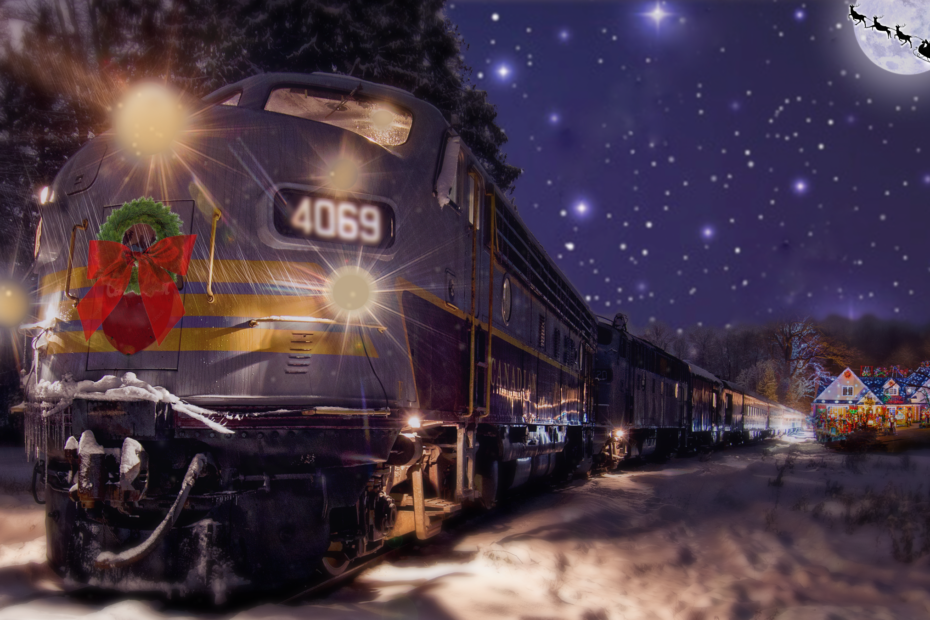 Beginning back in 2010, the Association started running a special holiday tour that left from the Railway Museum of BC in Squamish and made its fictitious way north to Santa’s workshop. They called their festive expedition the Polar Express.

What’s a name worth?

If the name is Polar Express and you’re the West Coast Railway Association, it’s worth 30 percent of your gross revenues. That’s what the Association was forking out annually to Warner Brothers who own the rights to the beloved Christmas story, The Polar Express. Beginning back in 2010, the Association started running a special holiday tour that left from the Railway Museum of BC in Squamish and made its fictitious way north to Santa’s workshop. They called their festive expedition the Polar Express. The Association wasn’t capitalizing on the story; the name just seemed fitting. The holiday feature was an instant success.  Little kids were enraptured by the whole candy cane shebang and parents and grandparents were equally delighted. Then Warner Brothers came calling and soon the Association was remitting 30 percent of their proceeds to the studio.

Little kids were enraptured by the whole candy cane shebang and parents and grandparents were equally delighted.

The West Coast Railway Association runs the Railway Museum of BC at Railway Heritage Park in Squamish. Last year, operations were shut down due to the pandemic. This pause in the action gave the Association some time to think. Thirty percent off the top is a large chunk of change. Did people really care about the Polar Express name? Was using it worth the price?

They decided to find out.

This year, the Association ditched the Polar Express name for their special Christmas excursion.  This year, adventurers setting out to visit Santa will travel in identical comfort and style, not on the Polar Express, but on the North Pole Express. Same elves, same hot chocolate, same candy canes but the name of the event is different. That’s pretty much it. That means that this year, this local non-profit society that’s dedicated to preserving British Columbia’s railway heritage, will keep 30 percent more of the collected revenue in their coffers.

The good news is that tickets for the Christmas train are nearly sold out. Polar Express; North Pole Express, it didn’t seem to matter. It’s a lovely book and a lovely movie, but the name wasn’t central to the experience the Railway Association was offering. It turns out that similar railway societies across North America had the same idea and decided to drop the affiliation with the book. When you’re five, all you really care about is that there are candy canes and that you get to meet Santa himself.

When you’re five, all you really care about is that there are candy canes and that you get to meet Santa himself.

Thirty percent more makes a big difference to the bottom line.  Santa may have his nine reindeer and a battalion of elves, but the Association relies on 125 volunteers to make the holiday magic happen. Train buffs from all over the Lower Mainland make the trek up to Railway Heritage Park in Squamish to take on tasks from manning the gift shop to serving as conductor for the miniature train. Without all the expertise and free labour lavished on this project, prices would have to rise. Nobody wants that, least of all, the Association.

I don’t have grandkids yet. But when I do, I’ll add the North Pole Express to my seasonal Must Do list. I’ll add it to a list that includes Van Dusen Gardens Festival of Lights, the miniature train in Stanley Park, Breakfast with Santa (somewhere); dragging them to The Nutcracker at least once, and, if we’re lucky, skating on Lost Lagoon. And I’ll probably read The Polar Express to them but I’ll leave out any mention of Warner Brothers. That thirty percent sticks in my craw.

All aboard the North Pole Express!

The Bookless Club has partnered with the West Coast Railway Association for this fantastic Christmas giveaway.  The train departs from the Railway Museum in Squamish. Visit wcra.org for more information about this fabulous package.

Register for my newsletter to receive further instructions for a chance to win this unique railcar experience for 15!

WHAT ARE/WERE YOUR CHILDHOOD HOLIDAY TRADITIONS?

Would you choose a life with peaks despite the valleys or a life that’s safe ad secure but also unremarkable?

What would youth be without unbridled plans? Harry Chapin’s song, Taxi, in which two old friends in a chance meeting, measure how close they got to their dreams. It always makes me blue:
But we’d both gotten what we’d asked for
Such a long, long time ago
You see she was gonna be an actress
And I was gonna learn to fly
She took off to find the footlights
And I took off for the sky

I’d choose a life with peaks despite the valleys.  I am envious of the smart and likeable people whose lives seem to be free of worries.  However, the most memorable hikes I have done over the years are the ones with steep uphills and downhills.  I think life should be like that as I wouldn’t appreciate the view at the top as much if I did not hike up from the bottom.

I chose a path of peaks and valleys very early in life. We lived in a little war time house on East 28th at Culloden. In July of 1952, at the tender age of three, I was riding my tricycle in front of the house. My Mom was inside feeding my twin sisters, aged 14 months, their lunch. When she looked out for me, I was gone !
Of course she was frantic and a neighbourhood search was on. My disappearance was aired on the radio. Soon there was a call from a lady who found me in her garden playing with her child. At age three, I had cycled all the way to 25th and Dumfries !
In 1972, I married a Brit who had the travel bug. We’ve travelled all over the world. We’ve been together for 50 yrs., which has been an adventurous mix of peaks and valleys complemented with the respite of the safety and calm of our beautiful province.