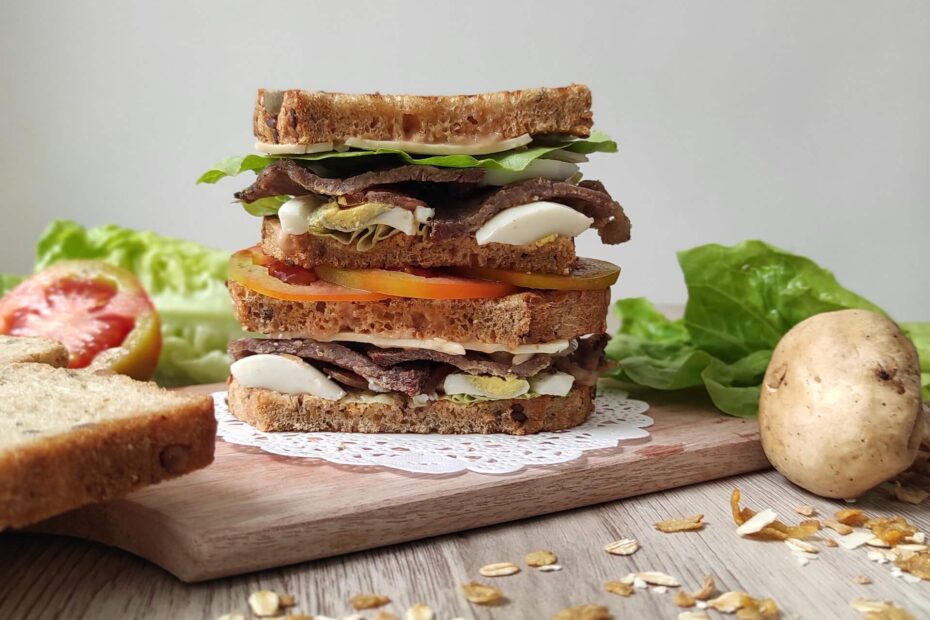 It’s hard to believe that anyone can claim to have invented the ubiquitous sandwich. I mean, really?! It’s the equivalent of claiming to be the sole genius behind dunking a cookie into cocoa.  As an identifiable concept, however, the sandwich dates back to 1762. Most people are familiar with the role John Montagu had in the invention of everybody’s favourite lunch meal. The lore is, in order to stay at the gaming tables, Montagu had his meals brought to him between slices of bread. His official title was the Earl of Sandwich, hence the name we use today.

The Croque-Monsieur, the Denver, the Clubhouse, the Rueben,
the Banh Mi, the Muffuletta …

From a rather narrow conception, the sandwich has gone on to great heights.  There are countless varieties to enjoy: the Croque-Monsieur, the Denver, the Clubhouse, the Rueben, the Banh Mi, the Muffuletta and the humble grilled cheese.  Sandwiches make a portable meal and are famously affordable.  Every once in a while and with great fanfare, however, someone brings a sandwich to market whose sole purpose is sticker shock. The common denominator in these offerings tend to be wagyu or kobe beef, truffle mayonnaise and, oddly, some sort of inclusion of gold leaf. A set of luggage costs less than one of these marquee sandwiches.

The single most creative thing you can make in a kitchen is a sandwich. The sky’s the limit when it comes to ingredients! I often have a hankering for a peanut butter sandwich. Not a regulation PB & J, but a couture peanut butter sandwich. I start with soda bread; toasted if it’s raining, untoasted if it’s not. Next up, crunchy peanut butter. It’s gotta be the good stuff where you have to mix in the oil. Pure peanut butter benefits from a slather of regular butter so that goes on first; it’s the only sandwich I put butter on. With the base established, I add a layer of horizontally sliced bananas. Horizontal slices are essential: they cover more surface and they stay put when you bite in. On top of that goes a frill of lettuce: ideally, romaine or iceberg; we’re looking for crispness here. Add a dusting of freshly cracked black pepper, and you’re done.

I mention this concoction while on a physically distanced walk in the woods.  A friend screws up her nose.

Another person’s eyes grow wide as frisbees, exclaiming: “Pickles!  What about pickles?! Peanut butter with pickles are terrific!”

From there, the fur and feathers flew.  We could agree on nothing.

People are proprietary about sandwiches; chauvinistic; jingoistic, even.  Mayonnaise?!  Horseradish?! Them’s fighting words! Long before Dagwood was overwhelming a slice of whole wheat with provolone, genoa salami, tomatoes, banana peppers and honey baked ham, people have been concocting their own idiosyncratic little smorgasbord surprises. There are plenty of contests for the weirdest sandwiches but that’s kids’ stuff. Any fool can put Oreo cookies between slices of bread. That doesn’t make it a genuine sandwich.  Deft inclusion of kimchi or membrillo, however, demonstrates true sandwich connoisseurship.

And oh-boy, does bread matter!

So, sandwiches are defined as bread or bread-like confines for a variety of fillings, but that’s a pretty wide defintion. As for sandwich spackle – butter, mayonnaise, etc. – those things are electives and unique recipes depend upon them; condiments make all the difference. Be it agreed, however, that burgers are not sandwiches. Delicious they may be, they’re disqualified from consideration in this instance.

I’m boiling eggs for egg salad sandwiches tomorrow. Here’s a tip: do not use an egg slicer. Grate your hard boiled eggs with a cheese grater. Use a scant amount of mayonnaise. You’ll be rewarded with cloud-like egg salad. Keep it simple. Salt, pepper; maybe a little cayenne. And no, I am not adding pickles.

What are you? Crazy?!