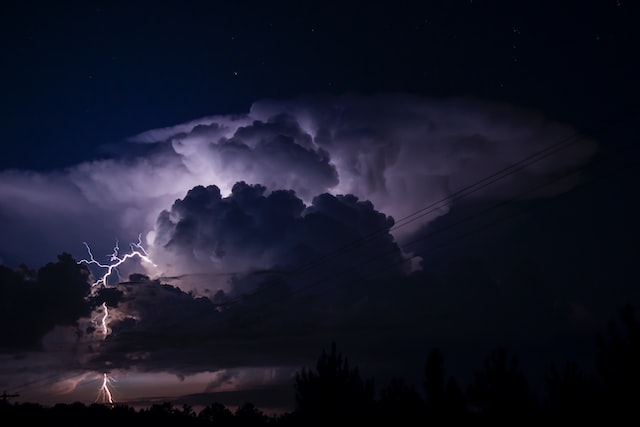 Someone was pounding on the hotel room door.

Even with the shower going at full bore, I could hear the loud thumping.

Wrapping myself in a towel, I peered out the peephole.

No one was there.

One minute later, there it was again.

Three times I dripped water down the hall checking to see who was pounding on the door.

In a flash, it became abundantly clear.

Outside my hotel room window sheet lightning was scorching the entire skyline.

Scintillating tridents carved frenetic pathways toward the horizon, and, oh, the rain, the rain!  The thumping I’d heard had been the stupendous thunder that followed each spectacle. This was an electrical storm of the highest order.

This storm was Oscar-worthy.

Most people love fair weather but there are those of us who have a weakness for the nasty stuff.

Foul weather – thunder, lighting, fierce wind – those command respect in a way no balmy afternoon can rival. This storm was Oscar-worthy. It deserved my rapt and undivided attention. I cracked open one of those small bottles of wine from the mini-bar and propped my feet up on the window sill. I was going to enjoy this.

Lightning isn’t sliver, it isn’t gold; it’s a momentary, blistering cadmium white. I was on the 28th floor. Suddenly, the room suffused with a shock of white light. I couldn’t be certain as it happened so quickly, but the top of a neighbouring building appeared to have taken a direct hit.

I put down my merlot and ran through what I remembered about lightning. Maybe sitting at the window wasn’t the smartest thing to do?  Years ago, I’d lived in Florida and remembered the sirens that would sound as a warning to clear the golf courses.  Kids got shooed off the playing fields when an electrical storm was brewing.  When a storm was predicted, Floridians would routinely unplug their toasters and TVs. They were well versed in dealing with Thor when he was in a snit.

A variety of things conspire to earn Florida the title of lightning capital of the US. The Centre for Disease Control says Florida has had more than 2,000 lightning injuries or deaths in the past 50 years.  Already this year, nineteen Americans have died from lightning injuries. In Canada, about ten people die annually as a consequence of lightning with about 150 people being injured.

… one third of lightning strike injuries
occur to people who are indoors.

I did some quick research. Apparently – and astonishingly – one third of lightning strike injuries occur to people who are indoors. Being in a shower or bathtub is advised against as an electrical strike gleefully travels up metal pipes. Same goes for running appliances or – get this! – lying or leaning on a steel rod reinforced floor. Conductivity! When lightning strikes, you’re supposed to get off your land line for the same reason. Cell phone calls, however, don’t pose a similar risk. Yak away.

The American National Weather Service reported that two kids, aged 11 and 13, died while rowing a boat during a storm in Orlando this September.  Earlier that same month, two people died when struck by lightning while jet skiing in Salinas, California. Southern Ontario is Canada’s hotspot for lightning strikes, with Windsor in first place, followed by Toronto, then Hamilton. Windsor reports a whopping 33 days where lightning strikes are an issue.

Dog walking, lawn mowing, outdoor maintenance – all bad ideas when Thor is throwing lightning bolts. And, I surmise, so is sitting with your feet up on a steel-framed window sill when you have a front row seat for the show.

EVER PLAYED DICE WITH MOTHER NATURE? HOW DID IT TURN OUT?

What skill did you acquire late in life?

I was struggling with a very dull knife once and was shown at the time that you can use the back of another knife as a steel to temporarily hone the blade of the knife you’re using to help get through the task at hand.

My son loves his knives. One year when we were away on holiday in Sun Valley, he brought his stones and sharpening equipment and sharpened all his knives. Such a long process!  He gave me a beautiful knife a long time ago and now he takes it to his house and sharpens it for me, leaving me one of his for the time being.  Have to agree, there is nothing like a good sharp knife.

We used to have a grinding wheel.  It had belonged to my grandfather and he made it his business to keep everyone in the family’s knives sharp.  He also sharpened our shovels and secateurs!  Sadly, the wheel went when the house was sold.  I sure wish I had it back, though!

During the pandemic, I learned how to bake bread.  It’s so easy and so good and I find myself wondering why I didn’t do this years ago.  Now, I make bread about twice a week.  The bread is delicious and it’s so inexpensive to make.

I changed a tire for the first time last month.  I simply googled how to do it and away I went!  It’s funny how you resist something thinking it’s too hard, but when you finally do it, you’re surprised at how easy it is.  But that doesn’t mean I’m about to tackle doing my own taxes …!