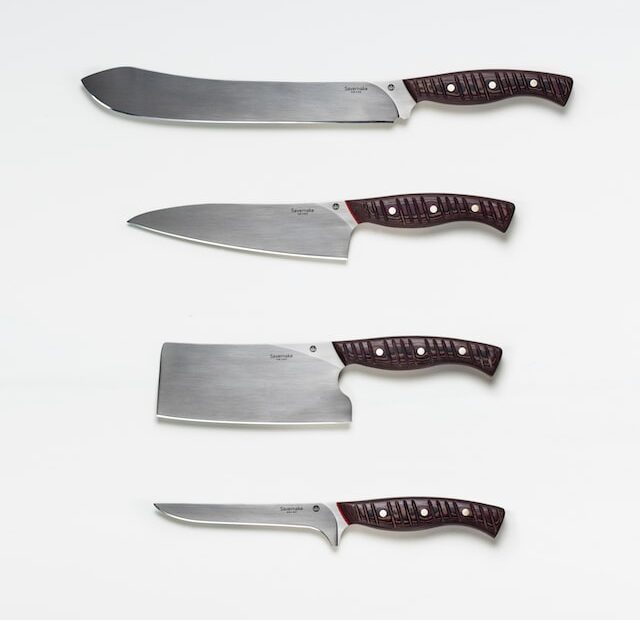 It’s said that a kitchen without a knife is not a kitchen.

Perhaps, then, it is also true that a kitchen without a steel is not a kitchen?

A steel, of course, is that menacing metal rod that lurks at the back of your knife drawer or gathers dust in the knife block. You’re supposed to use it.  In fact, it should come out each and every time you use a knife.

It’s said that a kitchen without a knife is not a kitchen.

Until recently, I was pretty sure that drawing a knife alongside a steel was the province of celebrity chefs, a kitchen flourish with no discernible effect. It turns out, however, that the culinary spectacle of a flashing blade and the sound of metal on metal isn’t just for show.  Apparently, knives – like teeth and gutters and dahlias – require a certain amount of care and attention.

I have a decades-old set of Henckels along with a few blades that mysteriously materialized in the top drawer. Without much to compare them to, I thought they were doing a serviceable job.

I was wrong. Basically, I was maiming tomatoes, bludgeoning cucumbers and sawing at beef. My knives hadn’t been sharpened since Mulrooney was in office. If the saying ‘a dull knife is a dangerous knife’ is to be believed, my knives were supremely treacherous.

There were inklings of underperformance. The fact that it took two hands and all my body weight to cleave an apple in half was probably a clue. This all came to light when I was chopping onions in someone else’s kitchen. With minimal effort and with lightning fast speed those orbs were diced into uniform, pungent diamonds. Impressive! I picked the knife up by its handle and blew on its blade as if blowing smoke from a pistol barrel.

“That’s some knife,” I commented.

The knife’s owner smilingly took it from me, extracted the steel from the knife block and gave the blade a few quick downward strokes.

“There’s a difference?’ I asked.

Knives are costly. The Cutco “Galley Set” which includes seven pieces plus a storage block will run you close to $1,000. An investment like that deserves a little care. If you do any sort of cooking at all, you rely upon a couple of your knives to get dinner on the table. Those blades slice through all sorts of things and each time the blade hits the cutting surface, it gets ever-so slightly warped. Even if you’re only cutting silken tofu, the blade loses its alignment – its edge – when it meets the resistance of the cutting board. This is where the steel comes in.

The steel doesn’t sharpen the knife, it hones it.

The steel doesn’t sharpen the knife, it hones it. Honing is a process that cleans up the edge and reestablishes the line of the blade. You hone the knife so as to extend the time between sharpenings. As few as three quick draws of each side of the blade across the steel is all it takes to restore the edge. When your knives fail the paper slicing test, it’s time to sharpen them on a whetstone.

As much as I’m delighted to have finally figured out how to care for my knives, I’m wondering how I got this deep into adulthood without having this skill in my toolbox.  Maybe it’s time to learn how to do an oil change?  How hard can it be, after all?

WHAT SKILL DID YOU ACQUIRE LATE IN LIFE?

Are you a napper?  What’s your take on the idea of company nap rooms?

I have had a 45 minute afternoon nap every day for over 30 years. During that period I started and ran a successful business for 25 years. Whether on a cruise or a business trip, I made time for my nap. Business colleagues who knew my schedule would even refrain from calling me between 2:30 and 3:30. I am retired now, and still look forward to my daily snooze. Doesn’t affect my nights sleep either.

I’m not a napper but would love to be. I have insomnia, so not only can I not sleep well at night, I also can’t really nap. I’m hugely envious of people that can and see how it recharges my husband on a regular basis. More power to the companies that encourage it.

I’ve been feeling lethargic lately, but there’s a nap for that.

I come from a long line of nappers. Both grandfathers, father and mother were all positive influences in the napping art, and they all lived long and relatively healthy lives. At age 76 I can probably count on my fingers and toes the number of days in my life that I haven’t had a nap. Unfortunately, I even used to fall asleep in class … not making a good impression on any teachers. I’m very much in favour of nap rooms and often used to have a nap after lunch in a quiet treatment room at our clinic. Ten minutes was all it took to get me motivated and energized for the rest of the day.

Now that I’m retired, I let my body dictate the length of my naps … most days 20 minutes, but occasionally (sighing blissfully), 40 minutes or even an hour.

Most employees get two 15-minute coffee (rest) breaks a day. (I wonder how many actually keep it to 15 minutes?)  Why don’t employers give their employees a choice between napping at their desks or drinking coffee?

They will be revitalized after a 15-20 nap or coffee break!

Those statistics were shocking!  I hadn’t realized the death toll fatigue causes on our roadways. We never think there could be serious consequences to “pulling an all nighter”.  More education is needed on this subject.