DID YOU CALL FIRST? 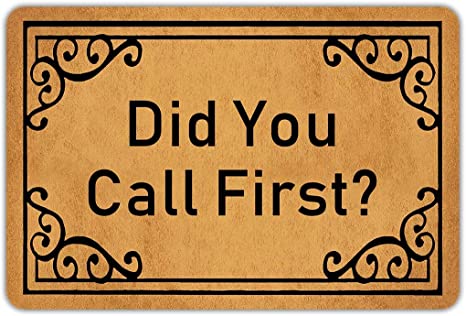 It was that neighbour.

The one who drops in, unannounced, all the time.

He decided he wasn’t going to answer.

He was working from home and just didn’t have time for socializing.  Deadlines. Commitments.  Maybe a smidgen of pure avoidance.

He figured she’d just leave after a few moments.

She came around to the back.

There he was, sitting with his laptop at the dining room table.

He waved back in mock surprise.

And then he did something that was pure genius.

Nefarious genius – true – but a stellar display of being able to turn on a dime.

He reached up and made a big show of taking earbuds out of his ears.

Only he wasn’t wearing earbuds.

He then put the pretend earbuds in his pocket and opened the door.

I was pretty impressed when he related this story.

He reached up and made a big show of taking earbuds out of his ears.

Yep, unannounced visitors are something you have to have a plan for.

The unannounced guest is a challenge to hospitality. Perhaps even to civility.

I’ve heard it said that the unannounced guest is the equivalent to interrupting, but interrupting on a scale like firing guns into the air.

For as sure as shooting, you were doing something before you heard that untimely ‘ding-dong’ or rap on the door. Home isn’t what it once was. Today people work from home. Today, people are mid-way through a Peloton program or locked into a downward dog yoga position.  Today, people are in the middle of unloading a Costco run and they only have the armed guards for so long. Or maybe they’re Zooming. Or napping. Or plotting revenge. The thing is: they’re in the middle of something.

What you don’t do is knock on the door without notice.

What you don’t do is knock on the door without notice.

Not so very long ago, kitchens were populated with neighbours. The coffee pot was always on.  Moms tended to be stay-at-home moms. Dads were often raking leaves or cleaning out gutters, pleased at any interruption that developed.  Now, the great poverty of our time is time. Interruptions are problematic.

Now, the great poverty of our time is time.

They can also be embarrassing.

It was the middle of the day.

Day and night had no meaning to me at that juncture but, for the rest of the world, it was daytime.

There came a knock at the door.

I roused myself from my stupor and made my way to the door.

Standing there was an acquaintance. We’d met several times but weren’t too familiar with each other. He was holding a box.

I stood there, ashen, with sunken eyes, probably in my husband’s discarded dressing gown. I’m pretty sure I had spit up in my hair. I know for a fact that my hair was unbrushed and I had on no make-up.  I’m generally pretty slovenly when I’m at home but I’d taken it to a new low. I had a colicky baby. Hadn’t slept in months.

The man looked at me with grave uncertainty.

He was making a delivery.

“Ummmm …” he was marshalling his inquiry.

I saw this as my chance for salvation.

An opportunity to run for cover. And in my own version of removing fictitious earbuds, I responded.

I reached for the box and shut the door.

A bold move, but better than having him think the pile of laundry he saw before him was actually me.

And that, dear readers, is why you never drop by unannounced.

DO YOU LIE ON THE FLOOR WHEN YOU HAVE UNANNOUNCED VISITORS OR ANSWER THE BELL?

What’s your go-to soup?  Any favourite recipes or favourites at local eateries?

Just made your red lentil soup. Delicious!  As every French girl is known to do, I added a glass of white wine and some fresh ground white pepper.

A favourite at our house is green split pea soup which I grew up with as my mother was French Canadian. We always make sure to leave a fair amount of ham on the bone so there is a substantial amount in the soup. I used to make a huge pot, but now make just enough to fill a crockpot, which makes making it so much easier than stove top soup.. If I have a turkey carcass and a ham bone in the freezer I make what I call Clubhouse Soup, which also incorporates whatever vegetables need using up, whatever noodle or pasta that’s in the cupboard and usually a can of kidney beans, or chickpeas or a can of bean medley. A meal in a bowl!

We call our family favourite potage “Egabrag” soup. (Hint: read it backwards). I start by sauteing chopped onion, celery, and carrot in a large pan, then throw in any other veggies that are lingering in the crisper.  Throw in whatever leftovers  and maybe a can of tomatoes or some lentils along with broth of some kind and herbs and spices. Voila!  It’s always delicious and different every time and is a terrific way to reduce food waste. We freeze lots of it for hot meals when we’re short of time.

My Mum never made soup, so it’s been a journey for me.  Turkey soup was a logical starting spot as there are bones for stock and often turkey meat left long past anyone’s appetite for it. Now, beef barley is my go-to cold(er) weather soup. I also make chicken, ginger, yam and kale slow cooker soup (great if you feel a cold coming on) and various pureed concoctions based upon what I need to use up.  A soup dinner day is a treasure!  Apple beet coming up!

Like you, I always have a pot of soup on the go. There’s nothing so comforting as not only eating hot soup, but also the aroma of a pot of soup simmering. There is also something therapeutic and zen- like in the rhythmic chopping of vegetables. It’s both mindless and mindful at the same time. I can’t tell you my favourite recipe – whichever one I’m eating claims that title. My husband keeps threatening to open a food truck to sell my soups, but I’d much rather you come to my home for me to share some with you!

I made a Bottom of the Fridge soup for lunch today – perfect on a rainy BC day!  I’ll make your Red Lentil Soup after I replenish my canned tomato supply.   I’ve been using the turkey soup recipe from Best of Bridge since the book was published in 1980.  I prefer San Marzano tomatoes and add a generous tablespoon of curry powder & a pinch of dried savoury.  A quick whiz with an immersion blender and into freezer containers it goes.  We have turkey three times a year so there is usually soup in the freezer to enjoy or send home with our sons.

Our first trip to Africa, we learned a valuable lesson regarding food waste.  We tend to throw food out simply because it’s wilted. In African countries they eat everything and then boil the bones for broth.  Since then, each time I roast a chicken, I have a pot on the stove top for the bones. The great thing about soups is that you use up your tired vegetables. Come fall, I start making a variety of soups such as Italian Wedding Soup,  Sausage and Zucchini Soup, and Mulligatawny Soup. This Christmas, I decided to add the leftover stuffing to the soup pot and it was surprisingly good! On a rainy day in the fall, cutting colourful vegetables, sautéing them while the broth is a warming, brings a wonderful smell to our home, and simply lifts my spirits. Simply put, it’s good for the soul.

In the winter I make some kind  of rib-sticking soup every week. I’m an obsessed Soupaholic. This week I made pea soup,  a recipe from my mother in Holland. A smoked pork hock is simmered as the stock base.  I add split peas, frozen peas, leeks, carrots, celery celery root, garlic, onion,  the delicious meat from the hock, and a smoked sausage, and lots of pepper, plus some salt to taste. A traditional Dutch winter soup!

My husband and I love a nice hearty soup however it takes a long time to make from scratch. I devised a recipe using frozen shrimp and pork wontons, simmer for ten minutes in chicken broth with a slice of ginger, garlic cloves, soy sauce, Chinese cooking wine and sesame oil.  Then add whatever else you want like broccoli or bok choy or frozen shrimp! Ready in minutes and delicious!

Just this morning I got the ingredients for Greek Fasolada soup ready for today’s creation.  As I was doing that, my husband was reading your column.  It was 23 years ago that we re-met over a big bowl of Fasolada soup. Our go-to soup ever since.

previousCUP, OR A BOWL?
nextNO LOVE FOR ROOSTERS