NO LOVE FOR ROOSTERS 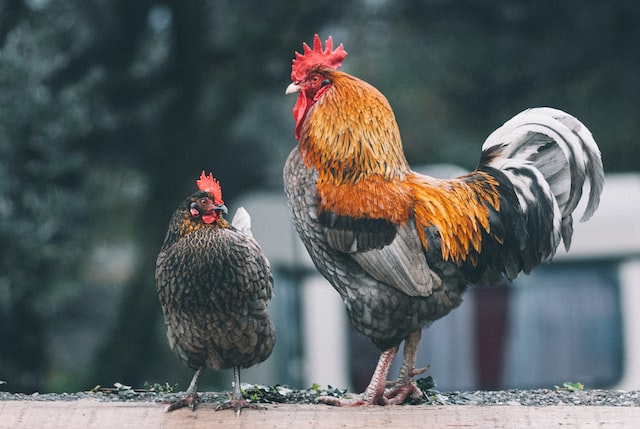 Linda has a farm in the Gulf Islands. She has exactly 99 chickens.

She has all sorts of hens. Some lay pink eggs, some lay aqua coloured eggs. You could call it a real ‘hensemble’.

The reason she knows the precise head count is that once the flock goes over 100 chickens, the Canada Food Inspection Agency gets involved. Over 100 chickens, she’d have to candle the eggs – a kind of egg x-ray – and weigh and grade the eggs according to industry standards. Normally, Linda has about one rooster for every ten hens. Right now, she has zero roosters.   Roosters, she says, are too much trouble. A hen will produce eggs with or without a rooster.

What you won’t get, however, are chicks. For that, you need a rooster. In the City of Vancouver you can have four chickens. Roosters, however, aren’t allowed.

You could call it a real ‘hensemble’.

So, roosters are too much trouble? Hmmm … the plot chickens.

I’ve always wanted backyard poultry. I figured a handsome, strutting rooster would be part of the mix. What was the thinking behind this prohibition on roosters?

Well, all by my lonesome, I have just figured out why.

I had to go to the wilds of the Yucatán peninsula to find out why, but, oh boy, do I now have the answer.

Roosters are a royal nuisance.

Turns out that roosters don’t just announce the dawn, roosters can crow all damned night long.

Long, lusty crowing that repeats about every four or five minutes. And if that weren’t enough, the crowing is responded to by nearby roosters. It just takes one rooster to destroy a night’s sleep but a chorus of roosters will have you crawling on your belly, a machete between your teeth, searching out the instigator.

Roosters are a royal nuisance.

My first sleepless night, I’d figured it was dawn when I started hearing the initial cock-a-doodle-doos. The Mexican sky, however, was still inky black. When the roosters crows, shouldn’t there be rosy streaks that indicate dawn? It wasn’t even 1:00 a.m. I lay awake listening to a battery of roosters relaying the first rooster’s warning on down the line. The crowing went on all night. It was like listening to the explosive laughter of drunks exiting a bar that never closes.

I asked Linda about this cock-a-doodle cacophony. She said the offending rooster needed to be in a coop. It was staying on hyper alert all night long to protect its flock. Confinement would give it a sense of security. Roosters are wildly territorial and hierarchical. Roosters crow in order of seniority with the dominant rooster being the first to crow in the morning. Their primary objective is defending their harem from predators, from other roosters, and from humans with plans for an omelette. When it comes to organizing your own flock, you have to get the demographics and ratios just right otherwise you’ll have poultry pandemonium. Too few roosters, and the roosters will be ‘henpecked’. Too many roosters? Feathers will fly as they compete with each other.

Roosters often don’t take kindly to other breeds that challenge their vanity. The fluffy feather top- knot of the Houdan chicken can make them the target of rooster bullying. Roosters want to feel that they’re king of the coop and will take a run at anything, or anyone, that challenges them, and that includes you. A rooster won’t let you forget the term is ‘cock of the walk’ and not ‘human of the walk.

DO YOU KEEP CHICKENS IN THE CITY? THINKING ABOUT IT?

Do you lie on the floor when you have unannounced visitors or answer the bell?

An insatiable curiosity added to a healthy dose of FOMO means I invariably always answer the door. This conviction was put to the test when I lived in a rooming house in Montreal. It was very early Sunday morning when I got a knock on the door and, in my disoriented and dishevelled state, answered it. Standing across from me was a couple preaching the merits of moving towards the light and away from the debauchery that I must have exuded. I stood there in my underwear listening to their spiel, and then politely asked them to leave. They seemed oblivious to my exhortation and rather obvious state of undress, however, because they just kept yammering on. I finally wished them well before assertively, closing the door and collapsing into my bed with a quizzical smile on my face and a memory I would sometimes rather forget.

Growing up in the 50’s, there were two kinds of drop-ins.  The “knock first” kind;  or, more frequently, the “walk in the unlocked backdoor” kind.  Our family’s back door was always unlocked, and our neighbour and friend across the street would walk in through that welcoming door, unannounced, every Sunday morning, perhaps not just to say hi but knowing that he’d get a whiff of freshly grilled bacon.  Being an observant Jew prevented him from eating it, but clearly his nasal buds relished the aroma of the forbidden fruit.  Somehow he never seemed offended by his Jewish neighbours eating it, and would simply sit down with us at the breakfast table enjoying the moment. For years my spouse and I carefreely dropped in on our friends. Always a last minute decision, with rarely a thought to phoning ahead.  2023 etiquette notwithstanding, those couples still remain our closest friends and they know they can come over to our locked building condo unannounced anytime!!  At 75+ , spontaneity spices up our lives. [ But please respect our early bedtime!]

When I was younger, I worked out a lot. It was early times when fitness classes were new to the scene. My husband had a construction business which ran out of our home. It was up to me to talk with customers who came to the door. I was off to my fitness class in my black leotard outfit when one such customer arrived. I talked with him and walked him down to the office area. I could tell he thought “Mmm, this is the way every office assistant should answer the door.”  About a year or two later the same gentleman came calling although this time I was not in the same shape. His facial expression went from expected pleasure to disbelief in less than three seconds. There was a long pause before either of us spoke.

I often give myself a facial and put a masque of some sort of clay on my face.  It takes a while to dry so I carry on with whatever I have to do while it’s drying.  On more than one occasion, I’ve answered the door forgetting that it’s on my face. In the instant that I open the door, I’m immediately reminded. People either laugh or look startled. That’s the risk you take when you knock on my door unannounced!

A long time ago, people held ‘at home’ days when you were welcome to drop by without having made arrangements first.  It was a sort of organized casual drop-in but nobody was taken unawares. Maybe we should bring these back as it would encourage neighborhood building?