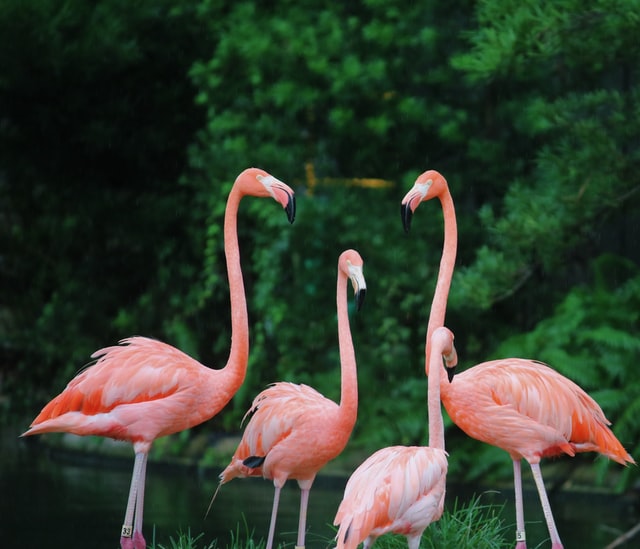 Every family has a secret language, most of it devised by the little lexicographers known as toddlers. In my house, the tall pink bird that stands on one foot was called a flingingmingo.

Frozen beverage on a stick? Well, that’s a ‘possic-oh’, of course.

The large toothy mammal that rises up out of the Zambezi was a hip-hip-opotamus. These are just some of the accidental manglings of language that we not only understood, but adopted. We’ve moved on from bedtime story pronunciations of padnas (pandas) and gergraffes (giraffes)  but, even today, our zoological nomenclature is arrested at flingingmingoes. Cucumbers are still cumbercues. Frozen beverage on a stick? Well, that’s a ‘possic-oh’, of course.

Childhood misnomers were understandable. Each day presents mysterious wonders and everything requires a label. Naming things was just the tip of the iceberg. I remember the hue and cry around the gift of an ostrich egg. What was in the egg? Well, a dinosaur, of course.  It was deemed well nigh impossible to crack open that egg and be proven a liar. Well, crack it open they did. Instantly, a great howl arose: “It’s escaped!”

One of the deathless anecdotes in my family involves my son and his literal interpretations. We were at the PNE.  The fair is, of course, a land of wonders. There are loggers who, with cleats and a strap, fly up and down tall trees. Rides that will launch you into orbit with Elon Musk. Trays of baby chicks that hatch before your very eyes! The Budweiser Clydesdales make an imposing sight, especially when you’re four.  You can watch a man slice through a garden hose and then a tomato with The Only Knife You Will Ever Need.  Great stuff.

And then there are the SuperDogs.

… there is no such thing as fun for the whole family.

You may already have learned on previous outings that there is no such thing as fun for the whole family.  The SuperDogs show, however,  promised something for everyone.  The show had dogs; my daughter was – is – dog crazy. The show had seating; dad was dying to take a load off. The show had shade; mom was eager to get out of the sun. And the show said Super.  That was all the enticement my son needed. We scrambled for seats.

… the expectant face of someone who’s pretty certain he’s about to witness a miracle.

My six year-old daughter sat sedately with her hands folded on her lap. Her dad slipped into the sort of coma that parents succumb to when they take their kids on day-long adventures. I occupied myself with checking and reorganizing supplies: hats, sunscreen, jackets, the accumulation of midway prizes. But my son was vibrating. I can see him still: madras shorts and shirt – you can do that to them when they’re young – a bucket hat, and the expectant face of someone who’s pretty certain he’s about to witness a miracle. He could barely contain himself. On tip-toes, he craned his neck to see. I remember thinking, Wow, and I thought his sister was the dog fancier!

The show started.  A man came out and explained that the SuperDogs were, if I recall, rescue dogs and household pets that had been trained to do tricks. A series of mutts jumped through hoops and leapt over small hurdles on command. Their trainer could ask them to fetch an orange ring or catch a frisbee and they handily accomplished the tasks. My daughter was delighted. Her dad was oblivious, slipping between sleeping and twitching. I thought the dogs were wonderful. My son, however, had climbed up on the bleacher seat and was growing more distraught by the moment. His delight had soured into clear disappointment. He was just short of heckling when his dad regained consciousness.  “What’s with him? Let’s get him out of here!”

I bundled him up and made a dash for the exits. Arriving back out on the midway I crouched down to peer into his four year-old face. “What, for heaven sake, is the matter?” He looked into my eyes as if all sense had departed me. Did I not see it?  Had I, too, not felt horribly cheated? His tear streaked face fixated on mine.   “Mom”, he gulped between sobs, “Those weren’t super dogs! “Where were their capes?”

“Ahhhh,” I nodded in agreement. “Super dogs should have capes, shouldn’t they?” Well, there was only one cure for that sort of disenchantment. I picked him up and off we went in search of possic-ohs.

WHAT WORDS WERE IN THE PERSONAL DICTIONARY OF YOUR HOUSEHOLD? DO ANY PERSIST INTO ADULTHOOD?

Keyless entry used to mean something entirely different. Did you grow up locking up? What are your safety protocols today?

My parents kept the doors locked when no one was home, but our house had a pass-through built into the wall beside the back door that was meant for milk bottles. As kids, we would chat with the milkman through it. One day, my father forgot his house key and ended up stuffing me through the milk box head first to reach the back door lock. While the inner door of the milk box was latched, a quick bang with your hand could pop it open. I used that a few times myself when I forgot my key.

We grew up with unlocked doors in our neighborhood during the 50’s and 60’s. We had home bread and dairy delivery, and while my mother was usually in the kitchen when the delivery men arrived, if no one was home, they would just come in, put the milk in the fridge or the bread in the breadbox, check to see if we had enough butter, or if there was a note in the kitchen table asking for hot dog buns or whipping cream, fill the order and leave. I don’t remember knocking on the kitchen door of my friend’s houses. Kitchens seemed to be “neutral ground” in all houses. Front doors were respected though, as they usually led right into the living room, which was a sacred space used only for invited, and usually adult company. We hardly ever locked our back door in later years, until about 2005, when sadly our trusting nature was violated, and we were robbed. Now they are always locked, even when we are at home. I miss those days of feeling perfectly safe in my home, doors and windows wide open and welcoming.

Your question about securing doors brings to mind a favourite story from my past. It was in the 50’s, our family was crazily building a float in the backyard for the Peach Festival Parade. For some reason we had an elderly great aunt visiting our house while all this chaos went on. On the morning of the parade, we all filed out, frazzled and sleep deprived, to drive to the marshalling grounds.  As we frantically departed, someone called out, “Did you lock the door?”  My great aunt coolly looked around the dishevelled house and said, “If anyone broke in, they would think it had already been ransacked”.  And with that, we were out the door. Sadly times have  changed, but our family is still pretty casual about locks and keys. Also sadly, my home often looks like it had recently been ransacked—maybe a good reason to lock the door!

Growing up on a Canadian prairie mixed farm after WW11, we had great need to protect our livelihood.  We padlocked the grainery bins, the large fuel drums, the garage that stored the farm equipment tools, etc. We tattooed the hundreds of turkey poults webbed feed to ensure identification at the farm auction houses but still experienced theft. On one occasion the stolen poults were returned/released at the end of the road, happy to join the rest of the flock. We children were strategically located to spy on turkey rustlers advancing from both directions, especially at Thanksgiving. The farmers united and shared information, similar to today’s Block Watch. More technical equipment such as video camera surveillance and security alarm monitoring has been added.  Covid, supply chain issues and the invasion of Ukraine has increased the need to protect/lock up prized seed grains. Safety protocols have expanded far beyond our own farming community.

Growing up in Chilliwack, I can’t recall ever locking the house door until after I moved away at 18, but we did lock our suburban doors when our kids were growing up.  Enough friends of our children, however,  knew where the ‘hidden’ key was so  it was not unusual to find a non-family member teens in the family room and/or kitchen when I came home in the afternoon.