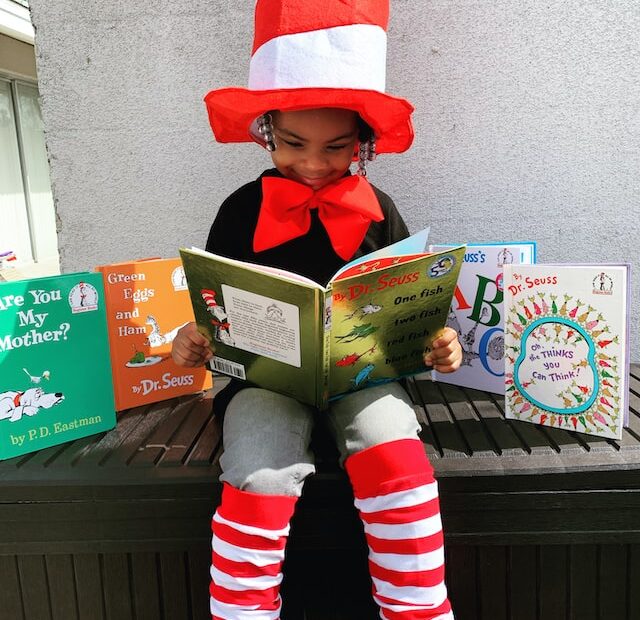 Wind in the Willows.

Someone far more efficient than I had preserved and donated their childhood library to the Salvation Army thrift store. Inside of each book cover a name was neatly printed. Inscriptions indicated that some had been gifts from relatives, commemorating birthdays, illnesses or accomplishments.

I ran my thumb along the row of spines.

I ran my thumb along the row of spines.

The Call of the Wild.

The Secret World of Og.

When what to my wondering eyes should appear, but precisely the same edition of Heidi that I’d read as a girl. I pulled it out and thumbed through the pages. Each illustration was like a family photograph.  All these years later, I could remember the captions under each alpine scene. It was transporting, an amygdala hijack that dissolved my adult self. There was a piano bench nearby so I settled down with Heidi and began to read.

There’s a grand literary tradition that pitches plucky little girls – usually orphans – against flinty old men wherein both save the other and Heidi and her grandfather are exemplars of that trope. Based on Johanna Spyri’s 1880 classic novel, I, too, had wanted to be an orphan living high in the Swiss Alps, sleeping on straw and cavorting with goats. Here she was, this plucky five year-old orphan navigating a new world, working little miracles along the way, in amongst all that incredible scenery. I sighed and closed the book. Heidi had instilled in me a still unrequited desire to visit not just the Alps, but Heidi’s Alps. A quick online search revealed that it was still possible to cavort with Heidi’s goats.

If a story is told well enough, if it finds purchase in a demographic, it’s a licence to print money.  The area of Switzerland that Heidi ‘lived’ in has capitalized on the beloved children’s classic.  Being Switzerland, they have done so tastefully and with restraint. Heidiland is a swath of Eastern Switzerland that encompasses the region where our little heroine lived out her story.  It has a tourism bureau that focuses on people wanting to visit Heidi’s house, to hike the Heidi Trail, to take in the Heidi musical. That Heidi never existed doesn’t dim the experience.

What’s this fiction worth to Prince Edward Island?  Studies show that one quarter of all island visitors will attend at least one of the Anne attractions.  If you thought that these tourists were mostly Canadians raised on Lucy Maude Montgomery’s tale of yet another plucky orphan sent to live with irascible elders, you’d be wrong.  According to the Tourism Research Centre at the University of Prince Edward Island, more than half are international visitors, with the numbers skewing heavily toward Japanese tourists.

There’s something homespun and upright about Anne of Green Gables and Heidiland.  On the other end of the spectrum you can visit a Hogswart of your choosing.  There are several  theme parks devoted to the well embraced Harry Potter series. There are Harry Potter rides, shows and shops.  Who knows, there may even be a Hogswart Auto Body or Surgical Centre.

These days a rich imagination can certainly make you rich.

WHAT WERE YOUR FAVOURITE BOOKS FROM CHILDHOOD?

Fake or real? How do you roll on the tree issue?

In May of 1963 my father turned 40 years old and decided to quit smoking and save for an artificial tree. He got a huge peanut butter tin, and every time he felt the urge to buy cigarettes, he would instead put the 35 cents into the tin. He would go around the house and shake it, collecting any spare change from us 6 children.  By the time December rolled around he had enough to buy a 6’ aluminum tree and a Sears Colourtone Roto-Wheel! Every year the tree and light have been assembled.  Dad is no longer with us, Mom is almost 101 and to her delight I have continued this tradition.  The original boxes are still intact, each branch going into their protective sleeves year after year.  It’s environmentally friendly, unique, pretty, and triggers fond memories of family and Christmas’s past.

I grew up in Germany and as a little child nothing but a fresh Christmas tree with real candles would do. Later on the wax candles morphed into electric ones, which looked like the real thing, not coloured ones. Now we have a real fir tree lit up, which lives outside. The living room is adorned by an almost 20 year old fibre optic tree, that twinkles in all colours of the rainbow until January 6 and then retires into the closet for another year.

We have one of each!  One in the living room – real – and one in the family room – fake.  We’ve made it so it’s hard to tell, however, by inserting several real boughs of greenery to the fake tree.  My son asks if we should add fake branches to the real tree just to keep people guessing!

As my son has said “real trees smell good. If it’s not real, it doesn’t make ‘scents’”.

We’ve always had a real tree but this year we thought it was time to get a fake one. I shopped around for a nice fake and found one which looked beautiful on display. Set it up, lights were very bright so I decorated it with the hope it would look better. Then we realized the middle section lights were cool white and the rest warm white, and still so bright you couldn’t see decorations. I took all the decorations off, packaged it up and took it back.  Drove straight to a tree lot and got a beautiful real tree.  Maybe we’ll stick to a real one!

In years past I used to cut our Christmas tree at the tree farm along Steveston Highway.  But with their tree stock dwindling, I bit the bullet to purchase next door to the farm the pricier Noble Fir imported from Oregon.  We always enjoyed the scent and the needles that stayed green longer. Last week I suddenly heard my wife screaming in the living room.  I rushed downstairs. “I spilled the water while refilling the tree stand. Now our floor will warp.  I am too old to be doing this.  After Christmas we’re buying a fake tree when they put them up for sale.”  Oh no, would this be good-bye real, and welcome false?