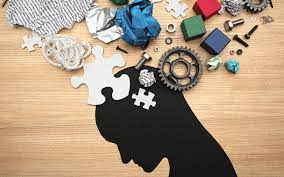 A warning: My mind wanders. If I take my eye off it, my mind can get lost in a souk of its own creation. Do not send me to the attic for a hatbox. If I come back, it’ll be with a vintage tennis racquet, a punch bowl set and firearm of questionable provenance.

I’ve never been one to look up something in a dictionary without digesting the whole page.

A simple word can set me off on a cascade of associations. Mention anorexic, I’ll ponder the latin root orexis, meaning appetite, mentally meander over to the image of an oryx, which will summon the visage of Margaret Atwood, author of Oryx and Crake, from there, leapfrog to her Massey Lecture on debt; then I’ll idle a while, poking at the silent “b” in debt, thereby launching a list of words in which a letter is silent: subtle, comb, pneumonia …

Free association. It’s the brain unbridled. The cerebrum in a hammock with an umbrella drink. I think it’s worth listening to the inclinations a brain at its ease shows us. Oftentimes, profound truths snake their way into your consciousness .On Monday night I saw the documentary Miss Representation. The film examines the role mainstream media has in the under-representation of women in positions of power and influence. From the advent of cleavage on nightly newscasts to the violence against women showcased in many video games, the case is made that women are marginalized by shallow evaluations that hinge almost exclusively on sexuality. The tract that accompanies the film says that “in society, where media is the most persuasive force shaping cultural norms, the collective message that our young women and men overwhelmingly receive is that a woman’s value and power lie in her youth, beauty and sexuality, and not in her capacity as a leader.” Jay Leno underscored this point with hallmark candour when he asked the Tonight Show audience to guess at photos: “Which is a news anchor, and which is a Hooters waitress?’

And doesn’t that sum it up nicely? There was a time when news anchors were freighted with gravitas. Now, they have ta-tas. Please note that ta-tas are distinct from mammaries, something all female mammals are, blessedly, equipped with. Ta-tas are to mammaries like profiteroles are to toast. Ta-tas are breasts on full dress parade.

As I watched the film about the rampant sexualization of women and the political issues consequent to that, I found myself thinking about cookies. In particular, Oreos.

The Oreo sandwich cookie was introduced by the National Biscuit Company in 1912 in New York. The simple creme filling sandwiched in between two wafers was a hit. Ninety-nine years later, in the United States alone, there are more than 63 Oreo variations.

Aside from the predictable seasonal motifs — orange for Halloween, red for Christmas; restricted calorie formats; novelty versions: Heads or Tails Oreos with one white cookie wafer and one chocolate cookie wafer; football shaped Oreo, the organic sugar and flour version — there are flying wedge products within the Nabisco range. The cookie whose job it is to out-cookie the rest of them. The cookie quarterback, if you will.

The latest entry to the cookie wars is the Triple Double Stuf Oreo. That’s right: triple cookie wafers sandwiching two double stuffed fillings. Five layers of cookie. It is approximately the height of a mandarin orange. Let’s just leave nutrition out of this, for now.

And speaking of luridly enticing, isn’t that our primary modus operandi for today? Haven’t we taken just about everything to its illogical extreme? We admired attractive women as they represent health and continuation of the species. We liked sweet treats because they are rewards born of prosperity. But rampant, unregulated progress has perverted these ideals to the point of being unrecognizable.

Ronald Wright in A Short History of Progress speaks of progress traps, where the advancement striven for contains catastrophic new problems, initially unperceived. Very much like hijacking the essential idea of a healthy, attractive woman and turning her into a single-purpose sex toy. If she buys into it — and the culture does its damnedest to make sure she does — she’s acquiescing to a very short shelf life for herself and her sisters. Progress trap.

What does it mean to market a cookie that will pretty much kill our children? Progress trap. What does it mean, for girls and for boys, when string-bikini clad Jessica Simpson does a lap dance on a car she’s supposedly washing all the while supposedly marketing beer? This isn’t shifting the goal posts, it’s bulldozing them into a bad part of town.

I understand sex. I understand cookies. Like any other mammal, I like ’em both. But when you push a thing beyond its innate value, you end up devaluing it. And there are consequences we made no provision for that will be our undoing, just as they have been for earlier civilizations.

It’s all a type of degradation. Breakfast cereals now contain more sugar than Twinkies; cookies now tip over into Exhibit A in the case against childhood obesity.

If we champion what is shallow and vapid and unhealthy, what do we end up with? Drop by a junior high school; even in the dead of winter, it looks like the female students are at a casting call for the role Jodie Foster played in Taxi Driver. Now ponder what the class of 2041 is going to be like, especially if their moms pack Quadruple Triple Stuf Oreos in their lunch bags.

The Vancouver organization Young Women In Business hosted Monday’s screening. They’re the ones on the battlefield right now and they get it. Miss Representation asks, “How can you become what you cannot see?” and it dawned on me: It’s hard to see past the cookie aisle these days.