HERE’S TO THE SALLY ANN 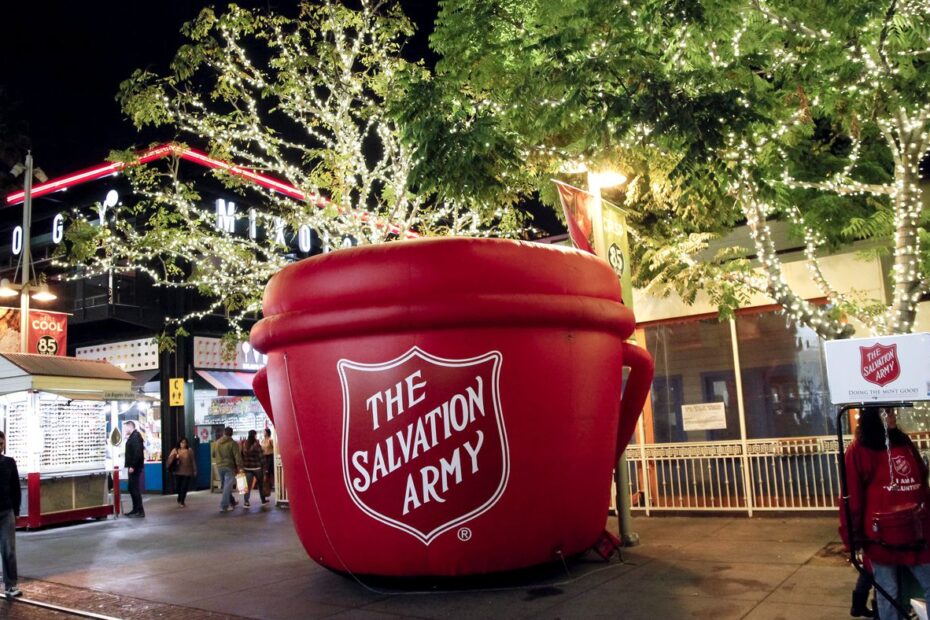 I’ve always admired The Salvation Army. Then again, how could you not be fascinated by a movement that was launched by someone who started out in life as a pawn broker?

The resolved are at it again.

The nation’s gyms are operating at capacity. Weight loss, self improvement, philanthropy, fitness: January is the most idealistic month, even if by the third week our will power has waned. So here’s the single easiest thing you can do to keep with your program of a Better You in 2022: This week, donate a bag of clothes to the Salvation Army.

They need them and I bet you don’t. Besides, with all that time on the treadmill, you’re going to need a smaller size, right?

According to Scott Gilmore, marketing co-ordinator for the organization’s national retail operation, post-Christmas is the Sally Ann’s lowest ebb for inventory. Like every other store, they get cleaned out over the holidays. Unlike other retailers, however, the Sally Ann doesn’t have the spring line coming through the loading bay unless you and I are involved.

… post-Christmas is the Sally Ann’s lowest ebb for inventory.

I’ve always admired The Salvation Army. It may have to do with having a terrific elementary school teacher who was in the Army, as they say. (David Hawks, I salute you, wherever you are.) Then again, how could you not be fascinated by a movement that was launched by someone who started out in life as a pawn broker?

Born in 1829, William Booth grew up poor in Nottingham, England. Pawnbroking put him in constant contact with those down on their luck, and England certainly had lots of those. In 1890, Booth wrote In Darkest England , a bestseller that compared post-industrialized England to, in the now-offensive argot of the time, “darkest Africa.” Life was pretty grim for many city dwellers.

At an early age, he had given his life over to “being a transformational influence in the community,” and started his Christian Mission, renaming his brigade The Salvation Army in 1878. This was a muscular version of Christianity that offered help to any and all, stating, “you don’t demand a certificate of virtue before you drag some drowning creature out of the water.”

… the streets would be a lot meaner without the Sally Ann.

The Sally Ann came to Canada in 1882 and today functions as the largest non-governmental, direct provider of social services. What it accomplishes, from beds for the homeless to daycare spots — is astonishing. Yes, the streets would be a lot meaner without the Sally Ann.

Oh, and annual salaries for the five senior commissioned officers of The Salvation Army average out to $34,185. There are some nice compensations — use of a car, housing — but clearly, they’re not in it for the money.

It’s the thrift stores, however, that most people instantly associate with the Army. With more than 300 outlets across the country, The Sally Ann qualifies as a major retailer, albeit one with a business model from hell. Every week, a new batch of inventory. Yes, it’s free, but free is more complicated than it appears at first blush. You have no control over that inventory: collapsible kayaks, eight-track players, crutches, small appliances, baby clothes and china tea sets. You don’t know what’s coming or how much. You may not even know what some of the stuff is. It takes a practised eye to recognize a rip-stop nylon, mosquito-netted sleeping hammock for two. I’d be looking for the tent pole to make the thing stand up.

The Sally Ann qualifies as a major retailer, albeit one with a business model from hell.

You have to collect much of the inventory yourself from little depots posted all over town. These kiosk boxes have to be installed, maintained, routinely emptied and the contents, often wet or broken, have to be collected. Needless to say, this task is especially eventful at Halloween.

Some inventory will have to be culled and taken directly to the landfill. (If you don’t want your old socks, it’s likely no one else does, either.) That cuts into your profit.

You must then truck the sorted goods to their retail appointment. Once there, more staff will be required to price and tag the inventory, which must then be displayed. Believe it or not, shoplifting is a peril. Overhead being what it is, security devices are not part of the program, and yes, there are low-lifes who will steal from a non-profit. Free is only the beginning of a complicated equation.

… smack dab in the middle of one of Vancouver’s most overheated real estate markets.

A Sally Ann opened in Kerrisdale a few years back. Yes, smack dab in the middle of one of Vancouver’s most overheated real estate markets. It opened up on the swankiest shopping streets in the area: 41st Avenue. It was a couple of doors over from the society florist; it was opposite everyone’s favourite Italian coffee house. It was kitty corner from a specialty cheese store and a stone’s throw from Hill’s Department Store, supplier of local private school boys’ flannel pants and their moms’ Blue Ruby bling. And there it was, like a fly in the ointment.

It wasn’t long, however, before the K’Dale and Shaughnessy set (Torontonians, read Rosedale set) began to notice baubles in the window. Yes, the nannies and housekeepers were customers, but before long, you’d see Tori Burch’ed, Missoni’ed (not from Target), Prada-clad SUV blondes nipping in for a find. The Kerrisdale Sally Ann is now a seventeen-year-old fixture in the neighbourhood.

Not so long ago, Sally Anns between Alberta and Thunder Bay started offering some of their more highly coveted merchandise by in-store silent auction. Recent auction items include a five LP set of mint condition Beatles albums and a Stratocaster guitar from the 1970s.

Another innovation is their waste diversion efforts. In the West alone last year, the Salvation Army diverted nearly 14 million pounds of stuff from landfills. Some donations are sold for their innate resource value; still other materials are diverted from the waste stream directly at the landfill. All in all, it’s a huge environmental benefit.

All in all, it’s a huge environmental benefit.

Like I said, I’ve always admired The Salvation Army. I’m going to source a replacement part for my blender at a Sally Ann thrift store this week. I’ll also be donating a Hefty bag of clothes that have given up on me. I’m pretty certain that I’ll leave with the replacement part … plus that collapsible kayak.

I can hardly wait.